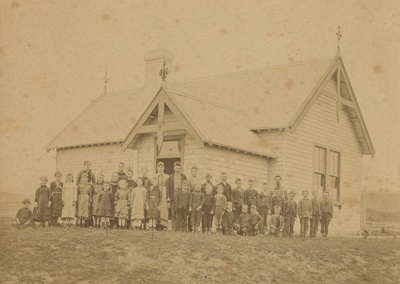 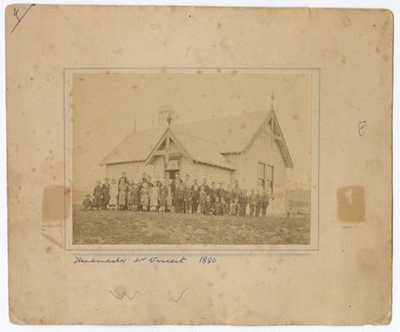 This is the first photograph taken at Otautau School, it is dated 1880. The school was located on Queen Street and was built in 1879.

The school opened on January 26, 1880 with a roll of 42 pupils (32 of whom are in this photograph), with the first Principal being Mr Vincent who is also photographed.

The school remained on this site for 74 years before shifting to the current site in September of 1954, from which it still operates in 2018. The original school building in the photograph was taken over in 1957 and opened as St Michael's Catholic School. St Michael's closed in 1976.

Who is in the photograph? The following notes accompanied this photo:

On front at bottom of mount in blue pen: 'Headmaster Mr Vincent 1880'

Names are also written on the back, see public description for these.