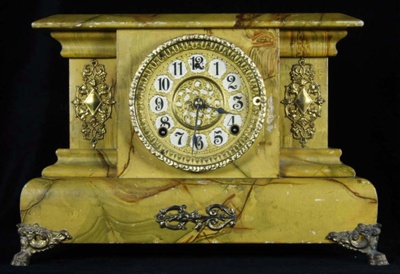 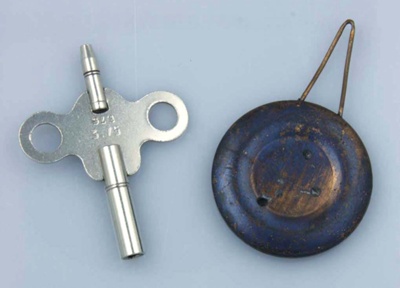 A greenish-brown wood veneer covers the front, sides, and top of this decorative mantle clock that sits on four ornate metal legs. The front has a central square section for the clock face that extends forward beyond two narrower sections on either side. The ‘12’ is flanked by the letters ‘SF.’ On, below, and on either side of the clock face are ornate designs in gold-coloured metal.

Now stored out of the clock is the small, round metal pendulum, which is painted blue. Also separate is a silver-coloured metal key for winding the clock. The ends are of different sizes. Engraved on one side is ‘6’and on the other is ‘3.75’ towards the larger end and ‘1.75’ towards the smaller end.

When donated, this clock was accompanied by two black-and-white photographs. One shows the clock with a group of 14 young boys with rifles, while the other shows one of the boys with the clock in front of a hedge.

For the coronation of Edward VII in 1902, the newly formed Waimataitai School Cadet Corps, to which this clock was presented for unknown reasons, paraded in public for the first time. The creation of the cadet corps had taken five years and coincided with a general rise in military volunteering in New Zealand after the Boer War (1899-1902).

This rise in volunteering resulted in issues with discipline and training. Thus in 1909, a new Defence Act made military training compulsory for Junior and Senior Cadets. The Junior Cadets, however, were not a success and were abolished by a 1912 amendment to the Act. The Waimataitai School corps, attached as it was to a primary school, would therefore have been disbanded at this point if it had not been already.

Former Waimataitai School Cadet Stanley Ernest John Williams (1892-1966) went on to active service in World War I. He departed New Zealand in 1915 and was attached for three years to the Auckland Mounted Rifles. Later he was posted to a dental unit, having been apprenticed before the war as a dental technician for Timaru dentist Allan Lewis Marshall.

After the war Williams returned to Marshall’s practice. He worked for Marshall and his business partner John Hallam Don for a total of 55 years. Williams was also a life member and one-time president of the Zingari Rugby Football Club and sat on the management committee of the South Canterbury Rugby Football Union. He was survived by his wife of 48 years, Annie Ivy Reka Hilton (1896-1991), two daughters, and three sons, including Jack, who took his father’s place in the rugby union and donated this clock to the Museum.

The William L. Gilbert Clock Company was founded in 1871 by William L. Gilbert (1806-1890) in Winsted (now Winchester), Connecticut to replace his former business, which had been destroyed by fire. By the turn of the century it was one of the largest clock companies in the world. After several name changes it was sold in 1964 to Spartus Corporation of Chicago.