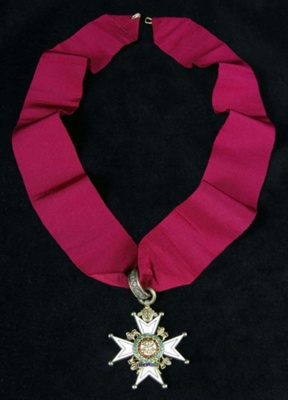 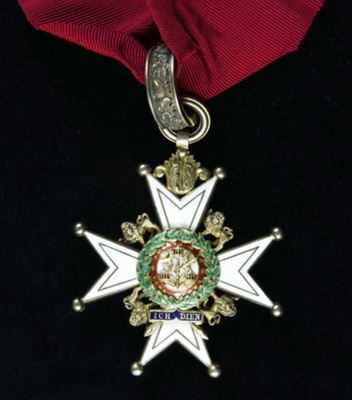 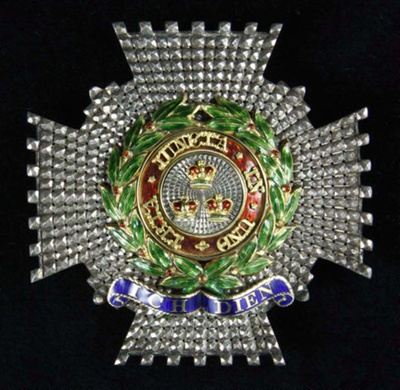 Maj. Gen. Henry Broom Feilden was awarded this military badge and star of the Most Honourable Order of the Bath when he was admitted to the Order as a Knight Commander, military division, by King George V on 1 December 1923.

The badge is made of gold and hangs from a red silk grosgrain ribbon by means of two gold rings, the larger of which is threaded on the ribbon and bears foliate decoration. Each end of the ribbon has one half of a hook-and-eye clasp.

An eight-pointed Maltese cross with white enamelling forms the base of the badge. Each point is decorated with a small gold ball and between every two points is a lion. At the centre of the cross are two green enamel laurel branches, crossed to form a circle. On a red band inside the branches, the motto ‘tria juncta in uno’ (‘three joined in one’) encircles three gold crowns. The crowns are arranged in a triangle around a rose, thistle, shamrock, and sceptre. Below the wreath on a blue banner are the words ‘Ich dien’ (‘I serve’).

A black box with cream velvet and satin lining accompanies the Insignia. It is stamped on the outside of the lid ‘Major General Sir Henry Broome [sic] Feilden – K.C.B.Mily’ and inside the lid with details of the manufacturer.

Henry Broom Feilden was born to Rev. Robert Mosley Feilden, Rector of Bebington, Cheshire, England, and his wife Frances Mary Ramsay in 1826. At the age of 18 he entered the army as a Lieutenant in the 38th Regiment. He was transferred to the 6th Regiment two years later and soon promoted to Captain. As a member of the 38th and 6th Regiments, Feilden participated in three major campaigns of the Crimean War.

Feilden ended his military career in 1893 as a Major-General, having attained that rank in 1890. He died at his home in Warwick, England in 1926, just shy of 100 years of age. His Insignia of the Order of the Bath came to the Museum through his nephew Geoffrey Nelson Feilden (1865-1947). Geoffrey immigrated to New Zealand in 1886 and settled in Waitohi and then Geraldine. His second wife, Mary Darvall (Templer) Feilden, donated the items after his death.

George I established the military division of the Most Honourable Order of the Bath in 1725. Its name derives from a custom dating to at least the twelfth century in which knights ritually bathed as part of their preparations for being knighted. The ceremony continued in use until the reign of Charles II.

In 1815, George IV, then Prince Regent, created a new civil division and three classes of knights of the Order, from highest to lowest, Knights Grand Cross (KGC), Knights Commander (KCB), and Companions (CB). Women were first admitted to the Order in 1971 and are known as Dames. Prior to being admitted as a Knight Commander, Feilden had been admitted in 1893 as a Companion, military division, by Queen Victoria on the occasion of her birthday.