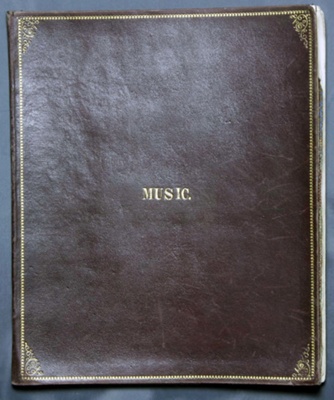 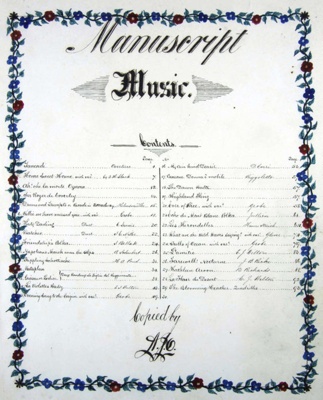 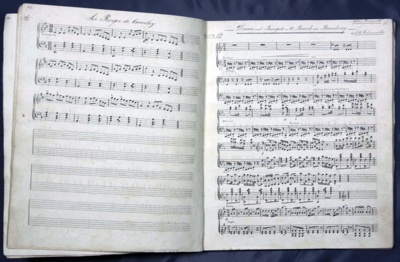 This leather-bound manuscript contains sheet music for piano, painstakingly and expertly copied by hand by Adelia J. Ouimette. The cover is embossed with the title ‘Music’ in gold and has a gold border, while the endpapers are marbled. The manuscript has a title page with a hand-drawn border of flowers and a table of contents which is signed ‘Copied by A.J.O.’ The pages are numbered.

Each piece of music has a title written in calligraphy, often accompanied by ‘Copied by A.J.O.,’ ‘Ada Ouimette,’ and/or ‘Adelia Ouimette’ written above. The music included ranges from Classical to folk pieces.

In 1873, soon after she arrived in New Zealand, Adelia became governess to Ada Rhodes, daughter of George Rhodes and Elizabeth Wood. George, with his brother Robert, had established the first sheep station in South Canterbury, the Levels, in 1851. This became the foundation stone of the region’s agricultural and pastoral industries, as well as the port and town of Timaru itself.

By the time of Adelia’s arrival, however, Elizabeth had remarried, since George died in 1864. Her second marriage took place in 1867 to Arthur Perry, a barrister who had recently moved from Tasmania and established a successful practice in Timaru.

The same year Adelia arrived at the Perry residence, Arthur’s brother Cecil also left Tasmania and joined Arthur’s practice. Soon after, in 1874, Adelia and Cecil were married. Adelia signed the manuscript only with her maiden name, suggesting that she concluded it before her marriage.

As a governess, Adelia became good friends with her charge Ada. The friendship endured after Adelia became her aunt, and in fact Adelia was popular amongst all her sister-in-law’s children, who nicknamed her ‘Aunt Cecil.’ Adelia and Cecil, however, never had any children of their own. Cecil died in 1917, and Adelia in 1938.