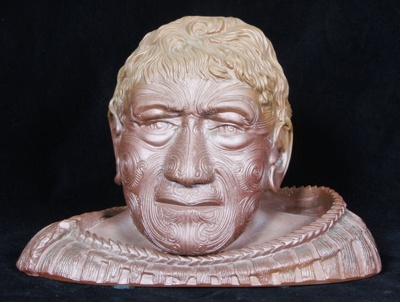 The subject of this brown, glazed ceramic bust is Pomare II, an important Māori leader. He is depicted from the top of the shoulders up, wearing a cloak and with extensive facial tattoos. His hair is short and wavy.

The colouring is uneven. For the most part, the hair is a yellowish brown, while the face, shoulders, and cloak are a reddish brown. The division between the colours, however, is very uneven and each colour spills over onto other parts.

The base of the bust has a hole at each shoulder, revealing a hollow interior, and five circular green felt pads spaced evenly around the outer edge. Scratched into the clay is, ‘No. 14’ and the signature, ‘T N Lovatt.’

As a third generation master potter, Thomas Norman Lovatt (1896-1968) was well-qualified when he applied for the position of manager at the Benhar Pottery in Otago. Having won the position, he came to New Zealand from Newcastle-under-Lyme, England in 1923. A difference of opinion over production techniques led him to quit in 1925, after which he worked for a fibrous plasterer in Dunedin.

In 1929, Lovatt founded his own plastery, Granalite Ltd., in Wellington, which soon began to produce pottery as well. By 1933, pottery production levels warranted the foundation of a separate company, New Zealand Potteries Ltd. Unfortunately, increasing competition and the breakdown of business partnerships led Lovatt to close his pottery in 1938.

New Zealand Insulators Ltd., which owned Temuka Pottery, offered him a job in 1941. Lovatt, wary of the debt and recent difficulties faced by the pottery, would only accept the position of general manager. The company agreed, and Lovatt began revitalisation. Under him the pottery, which principally made insulators and electrical fittings, expanded its line of domestic wares and also began to produce its own plastic and metal components. Temuka Pottery is still operating today and its wares are highly collectable.

Lovatt retired in 1966 and opened his own studio in Temuka, Lovatt’s Pottery Studio. He probably crafted this bust while running the studio. The reason for his choice of subject is unknown. Pomare II of Nga Puhi, born Whiria in the second half of the eighteenth century, lived at Otuiki in the Bay of Islands. Upon the death of his uncle, Pomare I, he took his name as well as his place as leader of Nga Puhi.

Pomare II was involved in trading with European shipping and a supporter of European settlement in the area. He signed the Treaty of Waitangi on 17 February 1840, and convinced Tirarau and Kawiti to sign it as well. When Hone Heke and Kawiti challenged British sovereignty in 1844-46, Pomare stayed neutral, but nevertheless was accused of treason and arrested in April 1845. He was eventually released and, remaining neutral, played a vital role in negotiations for peace. He died in the winter of 1850.