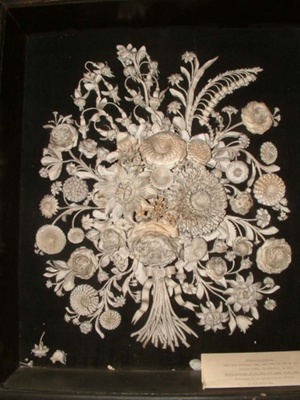 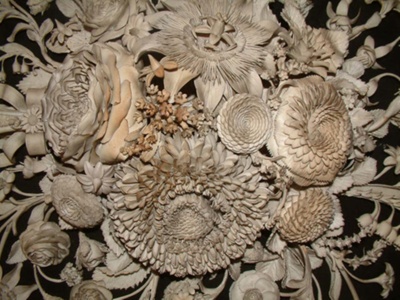 A fine porcelain clay was used to make this sculpted bouquet of fragile and delicate flowers. They were hand-carved using a small steel tool by an unknown artist and fired in a kiln at a pottery works in Christchurch. The intricately worked flowers include fuchsia, Solomon's seal, roses, dahlias, chrysanthemums, and others. The sculpture is in a black wood-and-glass case.

Records indicate that G. G. Lewis, Esq. presented this sculpture to the South Canterbury Historical Society in 1946. This was most likely George Gilbert Lewis, the third son of William and Ann Lewis, who immigrated to Timaru in 1878. Upon his arrival in New Zealand William worked for his brother John at his nursery on Maori Hill, and it was here, at the cob cottage, that George was born in 1882. William gave up on gardening in 1893 and opened a cartage business instead. He died in 1923.

George did not follow in his father’s footsteps; he opened his own plumbing business and for a short time in the early 1920s also owned the farm Watarah near Albury. Unfortunately, a bout of bad snowstorms and stock losses forced him to sell the farm and focus again on plumbing. Later he built and owned a block of rental flats near Caroline Bay. He and his second wife, Florence (née Dale), retained their own residence close by, complete with an aviary which they later donated to Caroline Bay. The couple moved to Christchurch in about 1949 to live near their only child, Gilbert. George died there in 1953, while Florence died in 1970.

How and from whom George acquired this sculpture is something of a mystery, although it is possible that it was owned by his father or uncle and passed onto him after the death of the original owner. Regardless, having grown up at a nursery and been introduced to gardening at an early age, George would likely have appreciated the subject matter and careful rendering of the artwork.

I am George's grandson. I found this article purely by chance and had no knowledge of this. Would like to find out if it is still on display at the museum.