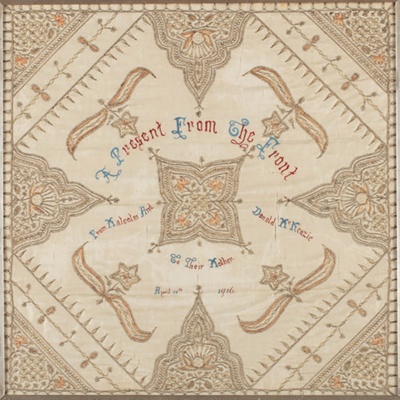 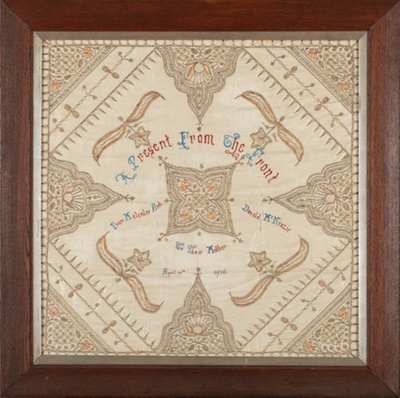 Twin brothers, Malcolm and Donald McKenzie had this piece of embroidery made for their mother, Flora, in Cairo during World War One. Flora received the embroidery in the mail only weeks after learning that her twin boys had been killed in action.

The twins enlisted together on May 28, 1915 and both served in B Company in the N.Z. 3rd Battalion Rifle Brigade. Malcolm was the first brother to die, being killed in action at the Battle of Messine on June 7, 1917. Being identical, there was confusion on the front as to which one had died and the family were notified that Donald had died rather than Malcolm.

Having been invalided out on May 26th, 1917, Donald was not with his brother when he died, rejoining his unit a month after Malcolm's death. In some ways this would seem fortunate as brothers being placed in the same unit resulted in many being killed together during the First World War. Yet, only two months after Malcolm, Donald was killed on 9 September 1917.

Malcolm is remembered on the Messines Ridge New Zealand Memorial for the missing and Donald is buried at Ridge Wood Military Cemetery in France.

The twins grew up at Progress Valley on one of the Improved Farm Settlement Scheme blocks. In later life, the boys became carpenters and worked in Central Otago before going to war. Though the twins had four brothers, they were the only siblings to serve overseas. Their elder brother Charles had recently married and had a child on the way and so it was decided that the twins would be the ones to represent the family in the war effort. Their brother Robert enlisted when he was of age, but, by the time his training was complete the war was over. While Hugh and John were too young to enlist.