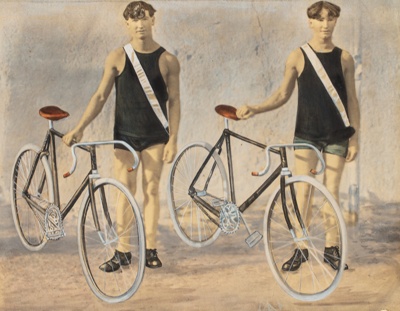 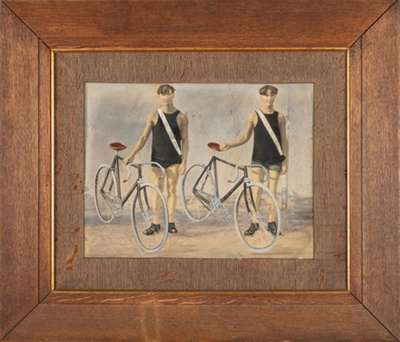 This is a photo of the McKenzie twins, Malcolm (L) and Donald (R).

The twins grew up at Progress Valley on one of the Improved Farm Settlement Scheme blocks and were both killed, at 23-years of age, during World War One.
Before the War:
The twins were very athletic people competing in many sports including boxing and cycling. They won medals for their achievements in cycling and this photograph of them is in celebration of the sporting capabilities.
The War:

The twins enlisted together on May 28, 1915 and both served in B Company in the NZ 3rd Battalion Rifle Brigade. Malcolm was the first brother to die, being killed in action at the Battle of Messine on June 7, 1917. Having been invalided out on May 26th, 1917, Donald was not with his brother when he died, rejoining his unit a month after Malcolm's death. In some ways this would seem fortunate as brothers being placed in the same unit resulted in many being killed together during the First World War. Yet, only two months after Malcolm, Donald was killed on September 9, 1917.

Malcolm is remembered on the Messines Ridge New Zealand Memorial for the missing and Donald is buried at Ridge Wood Military Cemetery in France.

Though the brothers never returned to New Zealand, shortly after their death, a gift the boys had sent to their mother, Flora, arrived home. This gift is cared for by the Waikawa Museum.