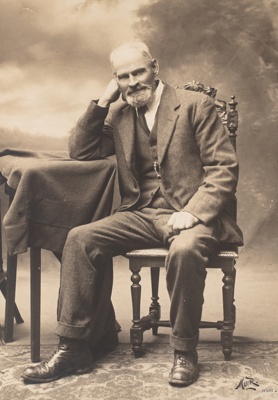 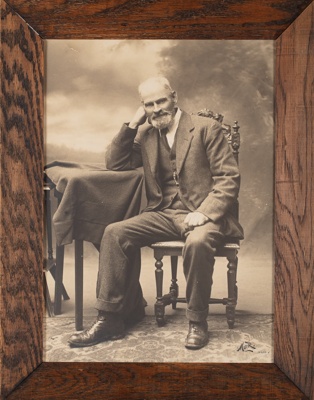 This portrait is of Charles Gilbee. Charles farmed in the Fortrose-Waimahaka district until his death in 1923 and is remembered as the hero of the Tararua disaster.

In 1881, the screw steamer SS Tararua set sail for Melbourne from Port Chalmers with a total of 151 passengers and crew on-board. The ship didn’t get far, when on April 19, 1881, it hit a reef 1 km off Waipapa Point on the Catlins coast.

At the age of 28, Charles Gilbee was working on a station near Waipapa Point. He rode his horse 50kms to Wyndham to raise the alarm about the sinking ship. Despite Charles efforts, the ship had been sinking since the early hours of the morning and many people had been washed overboard in the darkness. In total, 131 people were drowned, including 12 women and 14 children.

As a result of the SS Tararua disaster, the Waipapa Point Lighthouse was built, first shining its light in 1884. As at 2018, the sinking of the SS Tararua remains New Zealand’s worst maritime disaster involving civilians.