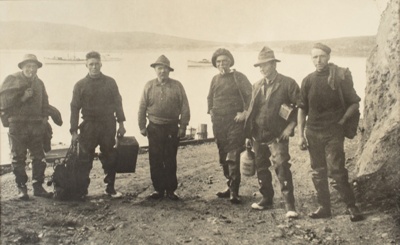 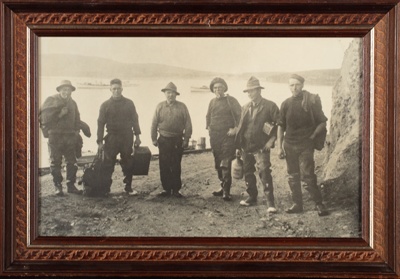 This is a photograph of Waikawa Fisherman at the Waikawa Wharf in the late 1930s.

About the Stronach Brothers:

James and Walter (Wattie) Stronach immigrated from Moray in Scotland to New Zealand, with two of their other brothers, at the end of 1924. For ten years, the spent their time working on farms or roading and were involved in the construction of the Milford Road into Fiordland.

In 1933, Wattie purchased a boat and became a fisherman out of Waikawa. A few years later, James joined him, eventually owning his own vessel too. Like most local fishermen at the time, the brothers mainly caught groper, blue cod and flounders. The pair lived out of a hut near where the Waikawa town hall currently sits.

James was badly injured by gunfire in World War Two. Having received a bullet in the neck, James underwent back surgery but never fully recovered from his wounds. Upon returning from the war, James could no longer fish and shifted to Invercargill where he died in 1954 at the age of 49. Wattie continued to fish out of Waikawa until his death in 1978 at the age of 77.