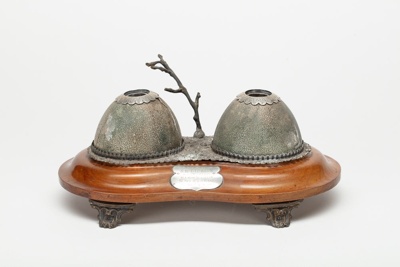 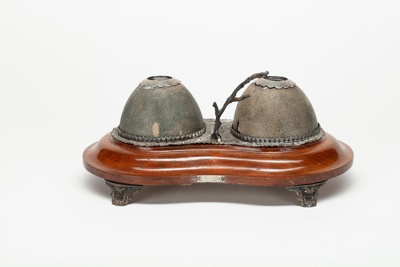 This unusual double inkwell was made from an emu egg and was presented to S.R. Dickson in 1879. The upright 'branch' in the middle is a pen rest.

Despite being made from an emu egg, which one might expect to belong solely in the realm of Australia, this inkwell was made in Dunedin by Nathan Salomon.

Nathan Salomon, was listed in Dunedin business directories as a 'Chronometer, Watchmaker, Goldsmith and Jeweller' and had premises in Princes Street from 1864 until 1870. In 1865 he exhibited some of his wares at the New Zealand Exhibition in Dunedin. Te Papa has a claret jug (GH010063) made by Nathan which also features an emu egg.

Inscribed on silver badge 'PRESENTED TO S.R.DICKSON BY A FEW FRIENDS AS A MARK OF ESTEEM. TOI TOIS NEW ZEALAND MAY 1879'.