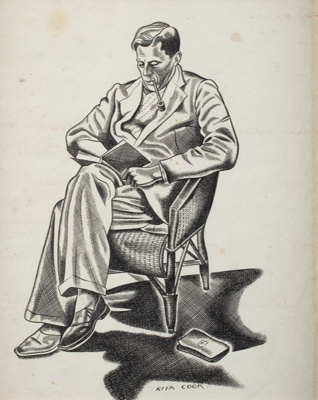 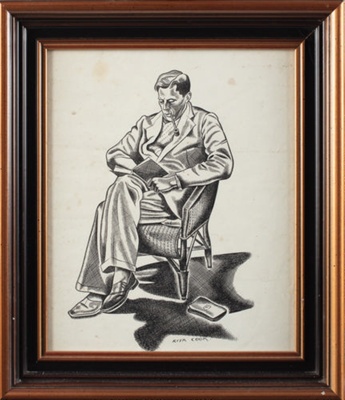 This ink and pen portrait depicting Harvey Gresham was produced by Angus in 1938 while she was living in Christchurch and working mainly as an illustrator for the Press Junior. Originally from Gore, Gresham was a bank clerk with whom Angus had a four-year relationship from 1935 to 1939.

“In 1935 Rita had met Harvey Gresham, who at twenty-two was four years her junior. Born in Gore, the son of a dentist, Gresham had hoped to study architecture, but his parents could not afford to send to university and when Rita met him he was working as a clerk for the Bank of New South Wales. Good-looking, charming and fun to be with, with a severe speech impediment that seemed to bring out the protective side in his female friends, Gresham liked the company of women, and women liked him. He soon became Rita’s friend and eventually her lover, providing her with a measure of stability in her private life during the mid-1930s.”
Jill Trevelyan, 'Rita Angus: An Artist’s Life' (NZ: Te Papa Press, 2008), 63.

“Among the works she exhibited ‘not for sale’ at The Group in 1938 was an oil painted that year entitled 'Portrait of Harvey Gresham'. By now Rita had been with Gresham for nearly four years--almost as long as her marriage--and the fact the she chose to exhibit an image of her lover implies a degree of ease and unselfconsciousness with the relationship. In another portrait, a pen-and-ink sketch of 1938, a relaxed Harvey sits in a cane chair, engrossed in a book. It is an intimate, domestic image.”
Jill Trevelyan, 'Rita Angus: An Artist’s Life' (NZ: Te Papa Press, 2008), 97-8.

Artist Biography:
Rita Angus was born in Hastings in 1908 and spent her childhood between Napier and Palmerston North. In 1927 she began a diploma in fine arts at Canterbury College School of Art, where she received a sound traditional training in life drawing, still life and landscape painting. Touring exhibitions of East Asian art were a source of stimulus, encouraging her growing interest in Far Eastern religion and artistic styles.
Angus married a fellow artist in 1930, but separated four years later and spent most of the rest of her life living alone. During the 1930s and 1940s she had various short-term jobs to eke out a living, and began exhibiting with the Canterbury Society of Arts. Having her painting Cass exhibited in the National Centennial Exhibition of New Zealand Art in 1940 signalled the beginning of critical recognition for her work.
However, widespread critical acclaim came relatively late. Interest in her work grew steadily from the late 1950s, due in part to her inclusion in national touring exhibitions organised by the Auckland City Art Gallery. Angus continued painting until shortly before her death in 1970, after which her reputation continued to grow. The National Art Gallery’s major exhibition of her work in 1982–83 confirmed Rita Angus’s status as one of the outstanding artists of her generation.