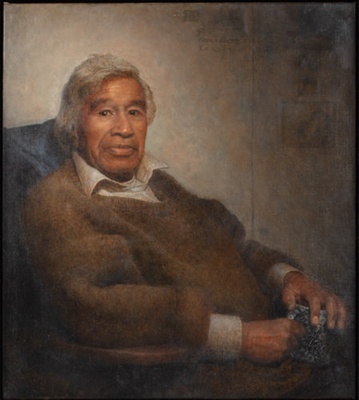 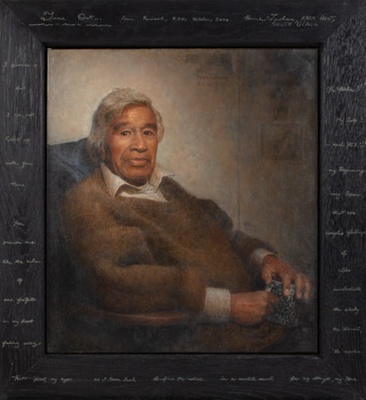 Simon Richardson’s Hone Tuwhare - October 2004 was acquired in honour of the poet’s ongoing support of the gallery.

Painted by Gore-born New Zealand artist Simon Richardson, the portrait was purchased in 2004 with proceeds from the 2004 Creative Places Premier Award, a grant from the Community Trust of Southland, and various donations. Painted over four months, the portrait includes a revised version of Tuwhare’s poem Time Out which has been handwritten onto the frame.

Based at Kaka Point in South Otago from 1992 until his death in 2008, Tuwhare was involved with many readings and education programmes at the Gallery and also gifted some of his work and honours to the collection. Among these gifts are pieces he wrote for artist Ralph Hotere and collector John Money, both prominent figures in the Gallery.

“Richardson’s passion for depicting the natural and the figurative can be seen in works such as Hone Tuwhare, the portrait of New Zealand’s literary great. The poet’s response to Richardson’s finished portrait was: “You beauty. It’s honest. You didn’t try to glamorise me. Good on ya, mate.” Simon Richardson: Otago Origins (New Zealand: Jonathan Grant Galleries, 2008).

Artist Biography:
Simon Richardson was born in Gore in 1974 and grew up in the iconic landscape of Central Otago. In 1992, he began studies at the Otago School of Art, graduating in 1996 with a Bachelor of Fine Arts Degree and started work as a full-time artist.

Over his career, Simon has held a number of solo exhibitions in Dunedin and Auckland, where he received critical acclaim, and has won an array of prestigious honours. He has been awarded the Canadian Elizabeth Greenshield Foundation Grant three times – an accolade just 48 other people had received when the third award was made, which enabled him to spend time overseas studying European painting. He was the winner of the Mainland Award in 2003 and was a finalist in the Visa Gold Awards in 1998 and the Adam Portraiture Award in 2004 and was awarded a scholarship from the New York Academy of Art in 1997.

He has painted a number of high profile New Zealanders, including a portrait of poet Hone Tuwhare, former All Blacks captain Anton Oliver, and was commissioned to paint the Civic Portrait of Dunedin Mayor Peter Chin and the Christ’s College Headmaster in 2010.