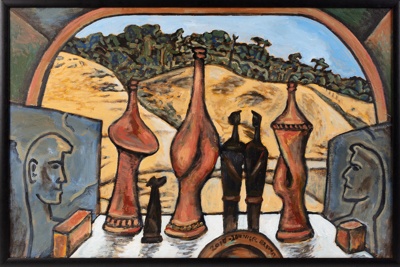 This artwork by Nigel Brown was painted from the back door of his farmhouse at 'Cosy Nook', a small fishing settlement in Western Southland. In the background is Pahia Hill, named after a local Rangatira who drowned in Foveaux Strait in the 1820's. The three 'pots' in the title are by Nigel's friend and artist Barry Brickell.

Nigel Brown's work has always been concerned with issues of place, identity, belonging and later the environmental impact that European settlement has made on the landscape. All those elements are referenced in this painting, a mixture of observation, simplification and synthesis. Nigel describes the painting as 'standing somewhat on its own, a still life and an offering'. He said that he often pondered the hill with its wind ravaged bush line and how it stood in contrast to his neighbour's farm which had been substantially modified with diggers and tractors and with burn-offs. Although the hill reminded him of childhood trips to the Urewera, he used the hill as “more than a backdrop, it becomes a symbol of locality and nature both particular and universal”.

Nigel writes, “The pots come from our small collection of Barry’s work. They were purchased from Southland Museum. I worked at Driving Creek in 2005 and have kept in touch with Barry who I see as an important artist embedded in this land similarly to Moffitt and Richard Nunns. My approach to Pahia Hill is a mixture of observation and simplification and synthesis.”

Artist Biography:
Born in Invercargill, New Zealand in 1949, Nigel Brown (ONZM) gained a Bachelor of Fine Arts from the Elam School of Arts in 1971 and began his full time artist career in 1972. Since then he has exhibited extensively in public and private galleries throughout New Zealand. His numerous awards, commissions and residencies include the Order of New Zealand Merit for Services to painting and printmaking (2004).

Brown has established a reputation as one of the most important figurative artists working in New Zealand and is acknowledged as New Zealand’s leading narrative artist. For forty years, Brown has used his art to address social, political, and environmental issues.

Brown’s distinctive visual language uses recurring motifs, stylistic features and symbolic characters which are strongly grounded in a New Zealand vernacular, employing these to explore and critique this country’s past and present (his)stories. Replete with references to politics, history, literature and the environment, Brown’s re-framing of these narratives invites consideration of the human condition at both individual and collective levels.