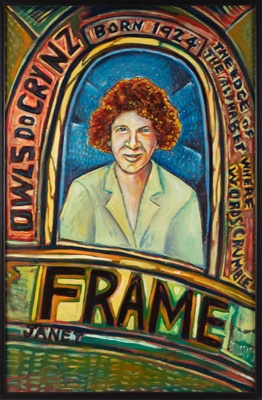 This oil painting, of the celebrated New Zealand poet Janet Frame, is one of Nigel Brown's 'Names' series, that pays homage to New Zealand icons. He followed on the 'Names' series ten years later with 'Names II' that opened in Christchurch in 1993. The painting of Frame is rendered in his immediately recognisable style of broad bold expressionistic brush strokes, raw colours and black outlines.

In 2015, when he was reflecting on the painting and the others in that series, he said that he “set out to make memorials to a group of inspiring writers and artists”. The 'Names' paintings include artists Munch, Angus, D.H. Lawrence, Baxter, McCahon, Modigliani and Van Gogh. Although Frame was not an acquaintance, Nigel regarded her as 'a woman symbolic of a deep New Zealand experience in a way that is unsettling, domestic, acute, female and powerful'. He thought that his work related to hers through Expressionism and said “in a way the ‘Names’ paintings were about binding literature and painting together in ways the modernism of abstraction and much contemporary practice then discouraged. It was my sign-posting for myself.”

Brown said, “Frame like Clairmont and Harris sucks you into a world on their terms completely. Part of me has always teetered on the edge of directness in order to be practical and communicative.”
Despite their lack of financial success, Brown regards his ‘Names’ series as an important series in his independent development, saying, “Later I would go into personages such as Cook and others building on the ‘Names’ approach. It is seeing portraits as meaning and ancestor totems beyond staid portrait conventions.”

Artist Biography:
Born in Invercargill, New Zealand in 1949, Nigel Brown (ONZM) gained a Bachelor of Fine Arts from the Elam School of Arts in 1971 and began his full time artist career in 1972. Since then he has exhibited extensively in public and private galleries throughout New Zealand. His numerous awards, commissions and residencies include the Order of New Zealand Merit for Services to painting and printmaking (2004).

Brown has established a reputation as one of the most important figurative artists working in New Zealand and is acknowledged as New Zealand’s leading narrative artist. For forty years, Brown has used his art to address social, political, and environmental issues.

Brown’s distinctive visual language uses recurring motifs, stylistic features and symbolic characters which are strongly grounded in a New Zealand vernacular, employing these to explore and critique this country’s past and present (his)stories. Replete with references to politics, history, literature and the environment, Brown’s re-framing of these narratives invites consideration of the human condition at both individual and collective levels.