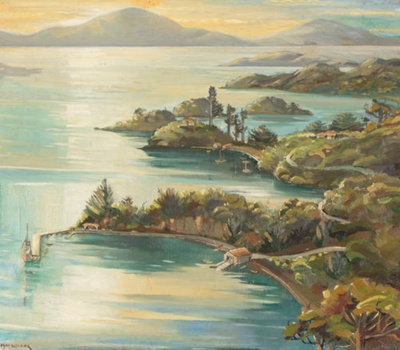 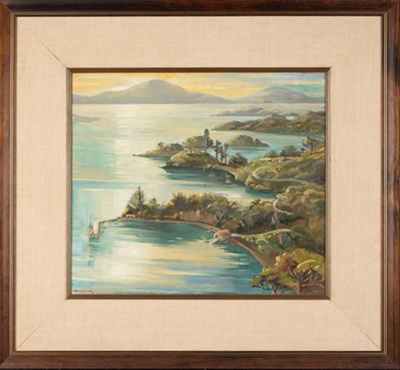 This painting by Maxwell Walker (1917-1989) is titled 'Sunset, Paterson Inlet from Observation Point, Stewart Island'. It was first shown in an ambitious solo exhibition, as one of 144 works, in 1939. The view is to the West, looking down the inlet, with Golden Bay in the foreground. Straight ahead in the distance is Pryse Peak and further away to the right Mount Rakeahua.

Walker has depicted the landscape with fluid brushstrokes which are contrasted with the more meticulously details of boats, jetties and house.

Though born in Auckland, he spent much of his early years in Dunedin. In 1937 he enrolled at the Dunedin School of Art, but, although obtaining first-class passes, did not stay on. At the outbreak of the World War Two, Walker enlisted, however, on medical grounds was never called up. After the war he moved to England where he exhibited at the Royal Academy and the Paris Salon. In the early 1950s, although this part of his career is sketchy, it is known that he began to work on theatre and film production. From the early 1960s, he worked as a painting restorer until an accident in 1984 left him unable to continue and he died in London in 1989.