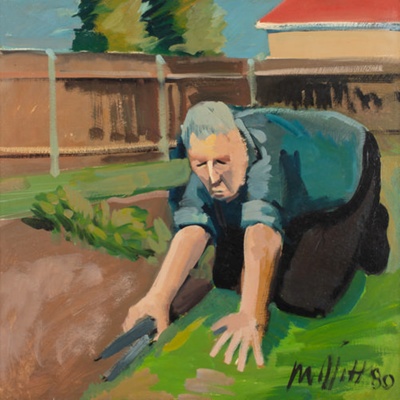 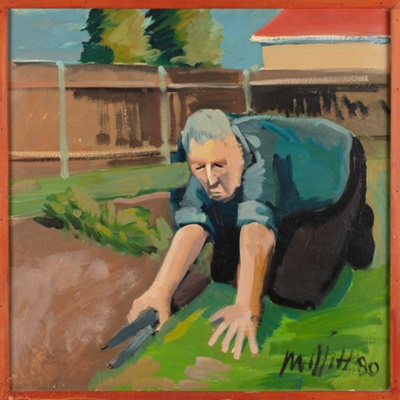 After the death of his father, Gilbert (Bert) Moffitt, in 1978, Trevor created the 'My Father’s Life' series which follows his father's life from childhood to old age. This journey reflects on Bert as being an observer during his childhood, to becoming an active participant in his life and then, returning to becoming an observer after the death of his wife. ‘Cutting Edges’ depicts Bert in his retirement.

In following Bert's life, Trevor's narrative series is an important reflection on the lives and stories of ordinary working New Zealanders in the 20th-century.

The 'My Father’s Life' series is Moffitt’s largest with approximately 140 paintings. In 1979 Moffitt received a Queen Elizabeth II Arts Council Grant to complete the series. This, in conjunction with leave on full pay from Burnside, allowed him to paint full-time for the first six months of 1980.
Chris Ronayne, 'Trevor Moffitt: A Biography' (NZ: David Ling Publishing Ltd, 2006), 101-2.

“At the Brooke/Gifford Gallery Trevor Moffitt unveiled forty paintings - the fruits of a concentrated stint of full time painting made possible by a Queen Elizabeth II Arts Council Grant during the first six months of this year. The series, carrying forward Moffitt's painted biography of his father, Gilbert, began five years ago. Images describing a man in his prime, fit and hardened by labour, are like stills from a documentary showing the physical nature of life between 1920 and 1950. The exhibition makes it clear that these personal remembrances of Moffitt's father are his way of exorcising the memories of discord between the two. From the vantage point of middle age Moffitt sees more clearly and appreciates the values and attitudes that motivated his father and which the youthful artist rejected. In some of the paintings, khaki clad boys, Gilbert Moffitt among them, depart on troopships for the war. Other images depict rabbiting, fencing, tree felling in the bush and playing rugby or cricket. The colour has a fresher warmer ring to it in contrast with the cooler grey tonalities of earlier works.”
John Coley, “Exhibitions. Christchurch,” Art New Zealand 18, Summer (1981).

Artist Biography:
Born in 1936, Trevor Moffitt grew up in the rural Southland town of Waikaia. He often drew on Southland, its people and its history for inspiration for his art.
A concern that New Zealand was being painted from a European perspective led him to pursue 'this place' through his own style, which placed importance on people as well as the landscape. While many other New Zealand artists at the time tried to pursue nationalism through landscape, Trevor’s interests lay in the interaction between people and the landscape.