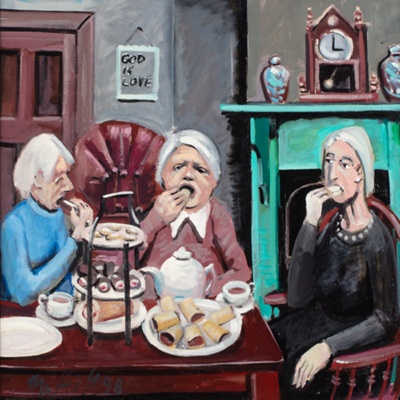 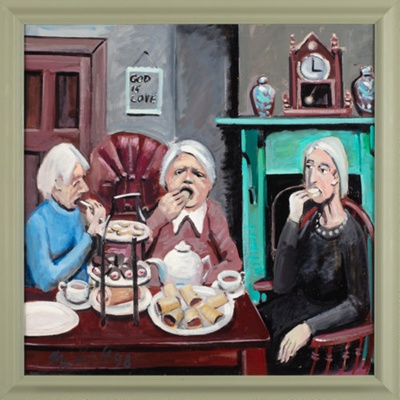 'Committee Meeting of Prohibitionists', forms part of Moffitt's, Hokonui Moonshine series which focused on the prohibition-era culture of the Mataura Licensing District and the illicit distilling of alcohol, which was to be known as “Hokonui”, named after the whisky stills that were operating in the Hokonui Hills, west of Gore.

Of the series, Moffitt says, “I read a lot of material about the Prohibition Movement and the distilling of whisky given to me by Sue Wilson and Jim Geddes, but a lot of the works...were sparked by my own memories.”
Adrienne Rewi, G.T Moffitt: The Hokonui Moonshine Series (NZ: Gore Publishing Co, 1998), 12.

'Committee Meeting of Prohibitionists' is informed by Moffitt’s memories of time spent with his grandparents in Gore. It recalls Temperance meetings including Moffitt’s grandmother, his great aunt, and a neighbour.

First exhibited at Eastern Southland Gallery in 'The Hokonui Moonshine Series' (1998), 'Committee Meeting of Prohibitionists' was purchased by the Gallery alongside another painting from the Hokonui Moonshine series, 'Sunday Morning in the Tool Shed'. These paintings offer parallel scenes of prohibition: one showing Trevor's grandfather and his friends drinking in his grandfather's tool shed while the other records his grandmother and her temperance group as they meet over tea and cakes.

Artist Biography:
Born in 1936, Trevor Moffitt grew up in the rural Southland town of Waikaia. He often drew on Southland, its people and its history for inspiration for his art.
A concern that New Zealand was being painted from a European perspective led him to pursue 'this place' through his own style, which placed importance on people as well as the landscape. While many other New Zealand artists at the time tried to pursue nationalism through landscape, Trevor’s interests lay in the interaction between people and the landscape.

Painted in black in the bottom left corner: 'Moffitt 98'.

Handwritten on the back in black: 'Hokonui/moonshine Series
Title 'A Committee Meeting of Prohibitionists
Pirce $3,750
Oil on H/B'