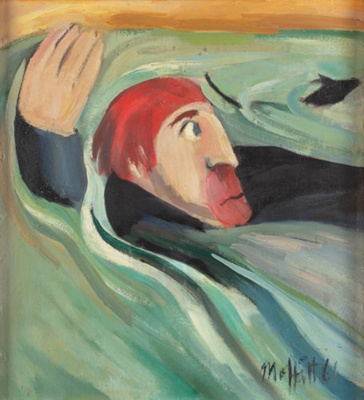 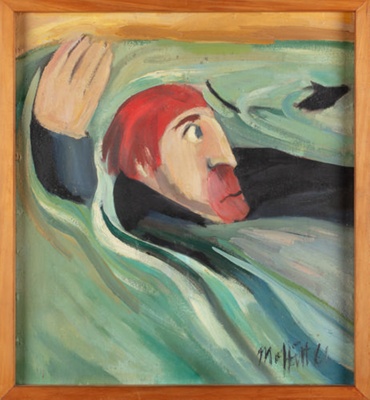 Painting, 'Mackenzie with Dog Swimming in the Clutha river'

This artwork titled 'Mackenzie with Dog Swimming in the Clutha River' is one of a series that Trevor Moffitt undertook in the 1960's based on the folk hero James McKenzie and his collie dog named Friday.

James Mackenzie was one of New Zealand’s first and most enduring folk heroes. In March 1855, Mackenzie was discovered with 1,000 sheep from Robert and George Rhodes' station ‘The Levels’, north of Timaru. The station overseer, John Sidebottom, and two Māori shepherds had tracked the missing sheep to a high inland pass in the basin of the upper Waikiki River, where they captured Mackenzie and Friday. He was brought to trial and sentenced to five years hard labour, though, he proved to be a difficult man to contain.

Mackenzie's exploits soon won him the admiration of those on the margins of society. Small would-be farmers wanting their own land or resenting the power of large wealthy landowners could identify with him, as could those who did not fit the mould of genteel Canterbury society.
The exploits of Mackenzie and his loyal dog ‘Friday’ left an indelible mark on the South Island high country and saw a large and picturesque chunk of New Zealand's South Island named after him.

“While doing some research for the Gold Miners the name of James McKenzie, the legendary sheep-stealer, “kept cropping up in conversations and it fascinated me.” The South Island Mackenzie country was named after McKenzie, the legend, although the spelling is different. For some reason Trevor’s eventual series took the spelling of the region rather than the man’s name.” Chris Ronayne, Trevor Moffitt: A Biography (NZ: David Ling Publishing Ltd, 2006), 61.

Artist Biography:
Born in 1936, Trevor Moffitt grew up in the rural Southland town of Waikaia. He often drew on Southland, its people and its history for inspiration for his art.

A concern that New Zealand was being painted from a European perspective led him to pursue 'this place' through his own style, which placed importance on people as well as the landscape. While many other New Zealand artists at the time tried to pursue nationalism through landscape, Trevor’s interests lay in the interaction between people and the landscape.

Handwritten in black ink '# 45 MSL, #45 CH CH. Both of the inscriptions have been crossed out with black ink.