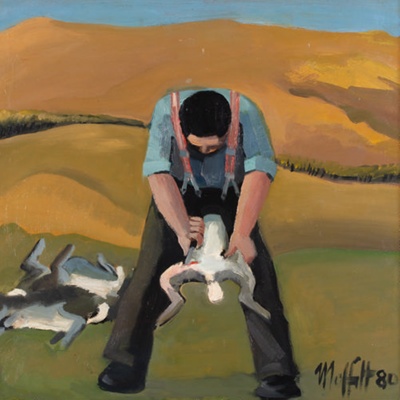 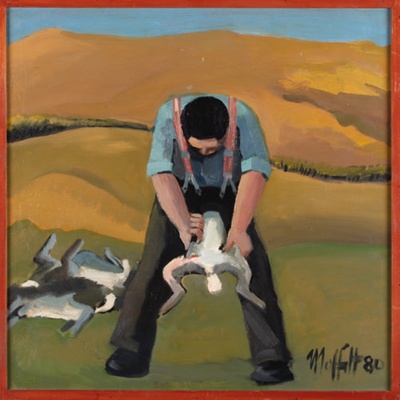 After the death of his father, Gilbert (Bert) Moffitt, in 1978, Trevor created the 'My Father's Life' series which follows his father's life from childhood to old age. This journey reflects on Bert as being an observer during his childhood, to becoming an active participant in his life and then, returning to becoming an observer after the death of his wife. This particular piece touches on one of Bert’s labourer positions as a rabbitter. Bert worked many physical roles on the land including rabbiting, shearing, and harvesting. Increasingly, machines were introduced into these roles and Bert did not keep up with the changes. Effectively, the work he was skilled in disappeared in a period of two-years and this drastically impacted both Bert and his family’s lives. Bert lived the majority of his life in the rural Southland gold mining town of Waikaia, where Trevor grew up. In following Bert's life, Trevor's narrative series is an important reflection on the lives and stories of ordinary working New Zealanders in the 20th-century and this change in the nature of Bert’s employment is a fascinating insight into this aspect of New Zealand history.

Born in 1936, Trevor Moffitt grew up in the rural Southland town of Waikaia. His family lived through financial hardship during his childhood and it was expected that he would leave school to go out and earn another income for the household. When Trevor refused and went to art school, his relationship with his father became very strained and the two did not speak for many years.
A concern that New Zealand was being painted from a European perspective led him to pursue 'this place' through his own style, which placed importance on people as well as the landscape. While many other New Zealand artists at the time, tried to pursue nationalism through landscape, Trevor’s interests lay in the interaction between people and the landscape.

Trevor died in Christchurch on April 11, 2006. In the lead up to his death, Trevor began to receive national attention for his contribution to New Zealand art and today, is considered one of the country’s leading narrative artists.