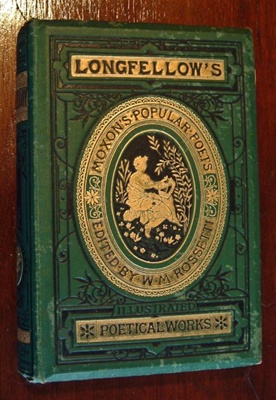 This publication of Henry W. Longfellow’s poetry was given to Clara Emily Clendon from her brother-in-law, Thomas Lumsden Millar, as a Christmas gift in 1884. On the front page Thomas wrote the following inscription: ‘From T. L. Millar to Clara E. Clendon, Dec. 25th 1884’. The inscription is decorated with a hand-painted watercolour image of blue flowers with green leaves.

This book is part of a series entitled Moxon’s Popular Poets which was begun by Edward Moxon in the 1870s and sold widely in the 1880s. The entire series consisted of twenty-six volumes and was accompanied by critical memoirs by William Michael Rossetti. All of the most well-known poets were included, such as Shakespeare, Byron, Wordsworth, Scott, Coleridge, Milton, Keats, etc. (1).

Clara was born on 14 April 1866 and was the daughter of Captain James Reddy and Jane Takotowi Clendon (nee Cochrane). She grew up at Clendon House, located in Rawene (previously known as Herd’s Point) in the Hokianga region. Clara had seven brothers and sisters as well as six older step-siblings from her father’s first marriage. The younger Clendon children were educated by a governess, Mrs Bennett, whom they shared with the children of Spencer von Sturmer, a local resident magistrate. Their school was an attic room under the gables of Clendon House. (2)

On 19 February 1885, Clara married Andrew Webster at Herd’s Point Church in Hokianga. They had three children: Frederick, James Reddy and Edith May.

For more information about the Clendon family and Clendon House, which is cared for by Heritage New Zealand Pouhere Taonga, visit our website.