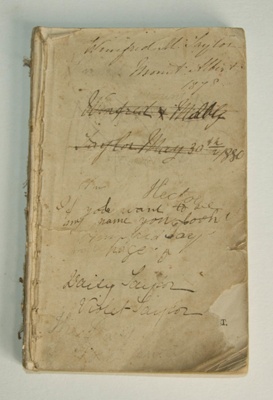 This hardbound textbook, entitled ‘Dr Ahn’s First French Course,’ was used by a number of the Kerr Taylor children including Winifred, Daisy, and Violet.

Winifred, Daisy, and Violet attended a private primary school in Morningside, Auckland, which consisted of only 10 pupils. Unfortunately, Daisy died of ‘brain fever’ on 15 September 1885, aged nine. Although it is not known for certain what was meant by ‘brain fever’, it is likely that it was some form of meningitis.(1)

Once Winifred and Violet had graduated from primary school, they attended Auckland Girls’ High school where they studied subjects such as arithmetic, geography, French, Latin, sewing, singing, drawing. During her schooling, Violet may have also studied science subjects as her name can be found in a number of scientific textbooks in Alberton’s library, including elementary botany, inorganic chemistry, elementary chemistry and physics.

During the 19th century, educating girls was seen by many parents to be fruitless. This was because women were expected to marry, have children, and run a household, all of which did not need formal education. It was common for girls to attend primary school in order to obtain a basic knowledge of reading, writing, and maths, but they were less likely to attend secondary school. (2) However, the Kerr Taylor sisters came from a well-off family, and subsequently received a higher education that most other girls of her era.