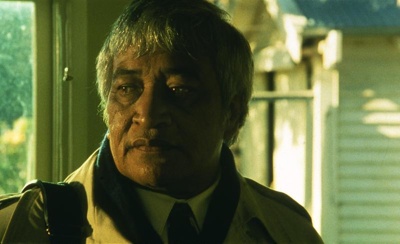 Photographed by Warrick Attewell, this still features Wi Kuki Kaa as Rewi Marangai in the 1991 Pacific Films production ‘Te Rua’. ‘Te Rua’ was written and directed by Barry Barclay and produced by John O’Shea. ‘Te Rua’ addresses the issue of cultural sovereignty, telling the fictional story of Nanny Matai, an Uritoto elder, Rewi Marangai, a patent lawyer, and Peter Huaka, a performance poet, who crusade to repatriate three ancestral carvings from a Berlin museum, taonga that were originally stolen from an Uritoto meeting house over a century ago. Barclay spent three years writing the script and received substantial funding from the Berlin Arts Council to make it. Cape Palliser was chosen as the location for filming the imaginary Uritoto marae and museum sequences were shot in both Wellington and Berlin.
This image is an individual film frame selected from the finished footage for use as a publicity still. Film stills are often produced this way, enabling the cinematographer’s aesthetic to be conveyed in printed publicity. Publicity stills are otherwise produced by a designated stills photographer.