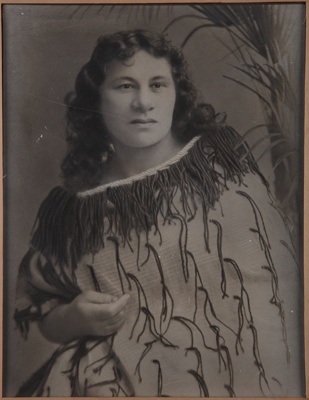 Though Sarah’s mother died only a few years after her birth, Sarah found a life-long friend in her step-mother, Caroline Brown. Brought up in a large, sociable family, Sarah Ann felt very alone on the isolated Cameron run, Waicola. Still a teenager, this sense of isolation and loneliness increased when her first child died, the cause being lack of women’s care and medical assistance which arrived too late. Sarah Ann’s strong will, stamina and quiet courage, coupled with visits from her father, got her through the earlier part of her married life. Later, the Cameron’s returned to Sarah Ann’s home at Centre Island, where they brought up 12 children.

As the granddaughter of Kāti Māmoe Chief Horomoto Paatu, Sarah Ann cared for and protected Centre Island. In 1877, the New Zealand Government laid claim to Centre Island for the purpose of a lighthouse. At this time, Sarah Ann’s Uncle, also called Chief Horomoro Paatu, wrote to her requesting that she maintain their claim and guardianship of the land as their Tipuna (ancestors) were buried there. It seems that both Sarah Ann and the government reached a compromise; while the government erected a lighthouse at Centre Island, Sarah Ann and William Cameron operated it until William’s failing health led to them shifting to Riverton where he died in 1898. Following the death of William, Sarah Ann moved to live with her daughter in Ormond, Bay of Plenty, where she died in 1930.