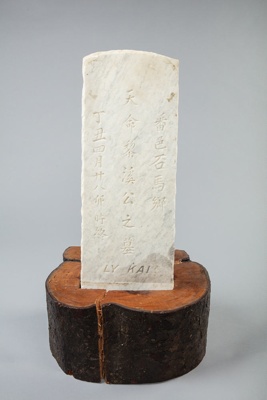 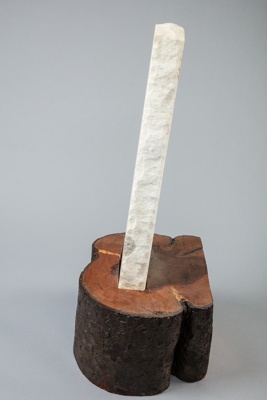 This headstone, from the grave of Ly Kai, is the only one that survives from the former Chinese section of Riverton Aparima cemetery. The three columns of Chinese characters, read from top to bottom starting on the right, record that he died in April 1937 at 6-8 am in the Riverton hospital. He was 87 and was the last of the Chinese that arrived in the 1880's to prospect for gold at Round Hill.

He was originally from Shek Ma (Stone Horse) a village in the upper Panya district, the district which most of the Chinese prospectors working at Round Hill came from. Ly Kai was known for his positive outlook on life, his motto being 'better bye and bye'.

Why is this the only headstone that remains?

In early half of the twentieth century, the Cheong Sing Tong a Chinese New Zealand association dedicated to sending Chinese remains back to China, began to repatriate the bodies of all Chinese persons buried in the Riverton/Aparima Cemetery. The first lot of bodies were on board the SS 'Ventonor' when it sank of the Hokianga Heads in October 1902 and 500 bodies were lost at sea. A second voyage took the remaining bodies home to China. A combination of this repatriation process and the Aprima River washing away the Chinese section of the Cemetery means that only Ly Kai's headstone remains as a reminder of those once buried facing east looking over the water.