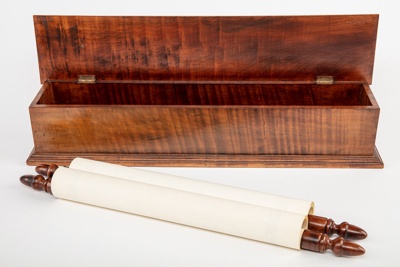 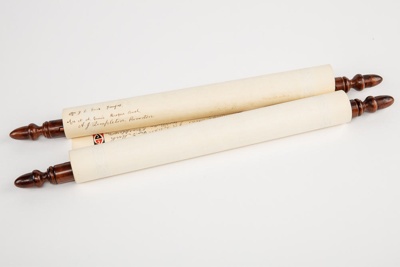 This parchment scroll is an illustrated address given to Doctor Ninian Trotter by the residents of the Wallace District. Presented to Doctor Trotter at an event in 1937, the address expresses the residents’ recognition and appreciation of the medical and community contributions that Trotter had given to the district after forty-years in Riverton.

Doctor Trotter trained first at the University of Otago and then went on to gain a Master of Surgery at the University of Edinburgh. During the 1880s, he practiced medicine in London Hospitals, and on returning to New Zealand Doctor Trotter settled with his wife Elizabeth (nee Godwin) at Tapanui for five-years. From there, he took up the position of Medical Superintendent at the Wallace and Fiord Hospital, which he held for 34-years.

Doctor Trotter dedicated his life to the medical needs of the Wallace community. He often travelled long-distances to reach patients, by horse and later car, or even on foot when neither could manage the terrain – and local tales recall that Doctor Trotter travelled so much at night that he could accurately predict auroras. His Dedion was the first car in the district and became extremely useful during the 1918 Influenza Epidemic. Doctor Trotter was paid on occasion, but as so often prior to social welfare, the poor needed the most attention and he attended their needs free of charge.

Doctor Trotter and his community services:

Trotter not only dedicated himself to the medical services of his community but he also was an active member of the social community, being either president or vice president of over 20 clubs or societies including the Rowing Club, the Regatta Society, and the Aparima Freemasons Lodge. He held the position of Mayor for 28-years and never accepted a penny for his role at the Borough Council. In 1951, Queen Elizabeth II honoured Doctor Trotter by presenting him with an MBE.

Trotter read for many years at the Anglican Church. He lived his life by the world of Paul ‘make yourself friendly to other human beings’ and viewed his attendance at the weekly service as contributing to this way of life. Characterised by his impeccable dress, waxed moustache and flower in his buttonhole, Trotter was an athletic man who lived by his principles of health
1) Swimming is the best possible exercise; he swam in the ocean every morning.
2) Plenty of walking; he walked miles a day to visit patients.
3) Let the sun get at you; he had a tan many were envious of.
4) Keep your head erect and your back straight.
Additionally, having observed the way animals roll on his family farm at Woodlands as a boy, Trotter believed that massage was also an important component of remaining healthy.

In his older years, Doctor Trotter related that he lived his life by having a ‘great belief in helping other members of the human race’, believing that selfishness was too prevalent in the world and that too many people devoted themselves to money rather than other people. Governed by these beliefs, the Wallace community loved and respect the man they called Doctor.

Doctor Trotter passed away in 1955 at the age of 89. A few years prior, a post boy on his bicycle had knocked him over resulting in a broken hip which left him bedridden until his death, but even in retirement and bedridden, Doctor Trotter’s door was always open to those in need of aid.