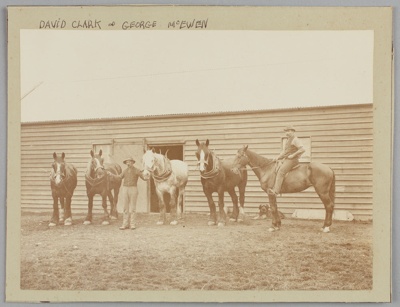 Photograph, David Clark and George McEwen with horses and dog

David Clark was a successful horse breeder noted for his fine Clydesdales. He farmed at Drummond, Heddon Bush and Groper's Bush, and held horse sales on his properties which were well attended. He was active in agricultural events and was a judge at A&P shows. He helped drain and set up the racecourse at Riverton during 1914 with this work vastly improving the course. For over nine years David was an elected member of the Wallace County Council, representing Otautau.

Written in biro at top of matte: 'David Clark & George McEwen'.
No inscriptions on reverse.