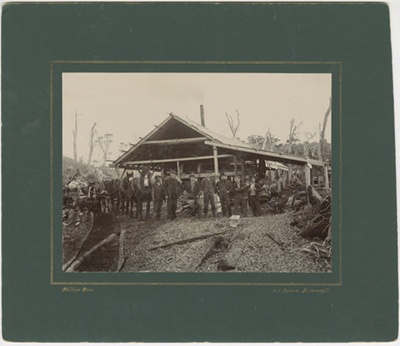 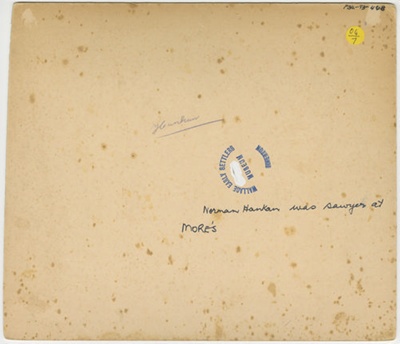 A black and white photograph of staff at More and Sons Sawmill.

A handwritten note on the back reads: 'Norman Hankan was sawyer at More's'. We have not yet been able to identify which of the men in the photograph is Norman Hankan.

James More and Sons were saw millers in Riverton. James More Snr established the business and took over one of the early sawmills in Riverton. They first had a mill near the present recreation ground, before taking it over the river and milling a block there. Later sawmills of the firm were situated on the Pourakino river. The mills lay six or seven miles back from the river with which they were connected by an iron tramway. The timber was conveyed by a locomotive to the river where they were transported to Riverton in punts towed by a steam launch. Before establishing the sawmilling firm, James More Snr had a varied career working previously as an engineer, a miner, and a station owner before taking up saw milling.