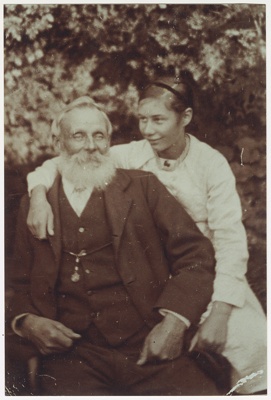 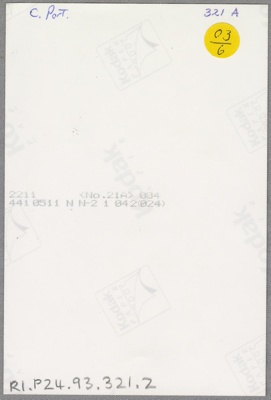 A black and white Kodak reprint of a photograph of Charles Arthur Port and an unknown woman, similar to RI.P24.93.321.1, with the other photograph being an original version of the photographs clearly taken on the same day.

This photograph is of Charles Arthur Port who co-established Port's Water Race in the Longwood gold fields.

Charles was born on 19 September 1848 in Derbyshire, England. He married Frances Ann Tucker on 2 April 1877 in Riverton, according to Ancestry they had seven children. Frances died at Riverton on 31 January 1895 aged 37. Charles married Bertha Elizabeth Law on 22 September 1898 and they had one daughter. He died on 5 January 1937, in Riverton, aged 88 and is buried there.

Charles Arthur Port and Henry Horatio Port were goldmining in the Longwood goldfield by 1877 and sought to improve their water supply. That year they obtained a licence to construct an initial race of six miles from Gorge Creek to the current location of Printz Battery. In 1888 they were approached by Chinese miners to extend the race to their workings at Round Hill. Chinese miners were contracted to excavate the race extension and it was completed over a period of fourteen months.

In 1891 the Round Hill Syndicate, which owned most of the water rights in the area by that time, purchased Port’s Water Race. As demand for water increased the race was upgraded and extended to improve supply. It reached its most distant point at Granity Creek in about 1897. It continued in use until the 1950s, and was part of a vital water supply to the sluicing operations at Round Hill.

Photograph RI.P24.93.321.1 is an original photo postcard of Charles Port and the young woman, with this copy having been added to the collection later. Family members visiting our museum to research their past often bring their own photographs with them as reference. A previous volunteer at Te Hikoi museum was in the habit of copying these photos so that they could be added to our collection. We believe that is the case with this photograph.