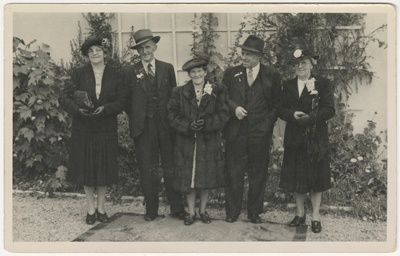 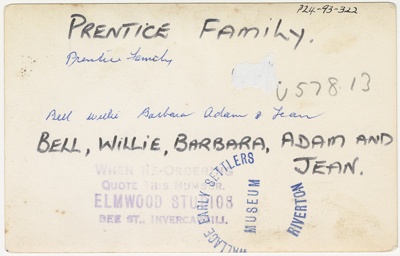 A black and white photograph of siblings, Isabella, William, Barbara, Adam, and Jean.

They were the children of James and Barbara Prentice (neé Robertson) who were married in Lanarkshire, Scotland in 1876 before immigrating to New Zealand in 1879 on the ship 'Invercargill', landing at Port Chalmers. James worked as a ploughman at New River, later at Spar Bush and Limestone Plains before farming at Riverton. James also spent some time in Tuatapere where his sons, William and Adam were in Business.

James and Barbara had 5 children, William and Adam were the only sons, and three daughters, Isabella, Jean, and Barbara.

William and Adam both served in World War One. Adam died on 14 February 1963 and William just 9 months later on 15 November 1963. Both are buried in Riverton cemetery.

Isabella was born in 1884 and married Alfred Tull. The couple lived in Christchurch. Isabella died on 16 July 1967 and is buried in Ruru Lawn cemetery.