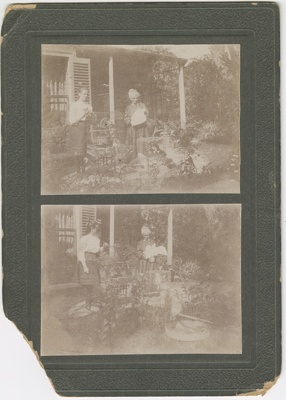 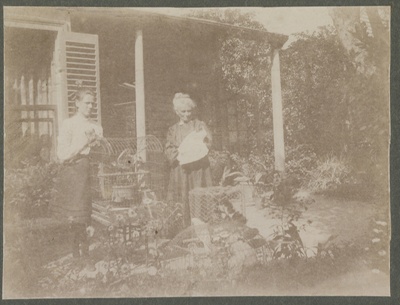 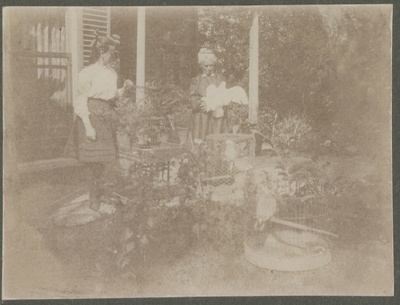 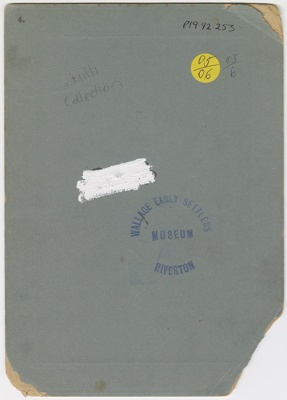 Two black and white photographs believed to be of Clara Jane Rice (neé Mills) and one of her daughters.

Clara was the daughter of John Mills and Elizabeth Davis born on 11 May 1850 in Melbourne, Australia. She married Hugh Rice in September 1869 in Riverton. He had been a carrier at the diggings in Australia and followed that trade here with a bullock team between Riverton and the lakes. In 1870 John and Clara took a lease on the Oddfellows Hall Hotel on Palmerston street. It is believed to be Clara and Hugh who renamed the Hotel 'Carriers Arms'. Clara and Hugh leased the hotel until 1873. He then worked in local sawmills. Clara's brother, John Robert Mills was mayor of Riverton for several periods between 1876 and 1911. Clara and Hugh had eight children in total, four daughters and four sons. Clara died in Invercargill aged 61 on 17 October 1910.

This photograph is part of the 'Mills' collection', a collection of photographs from the home of Minnie Mills of Riverton who died in 1974. Minnie Mills was the daughter of John Robert Mills and niece of Clara Jane Rice.