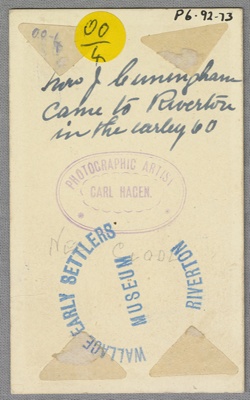 This photograph is of Sarah Cunningham (neé Clode) who married John Cunningham on 20 April 1882. John was a Riverton based carrier. The couple had three sons, Alfred, William, John, and a daughter Charlotte Rose (born 1893). We cannot positively identify the young child in the photograph, though it is possibly one of Sarah's boys, dressed as was common at the time.

Photographer Carl Hagen was a native of Germany who immigrated to New Zealand in 1868. Around 1870 he became a travelling photographer in partnership with Herny Rennert. They made several circuits of the goldfields before terminating their partnership. Carl continued working under his own name and based himself in Balclutha and Mosgiel. In 1877 he was declared bankrupt, but pulled his affairs back together and opened a studio in Gore. He still travelled, and advertised working visits around Western Southland. In 1891 he retired due to ill health.

Inked in black on the front is: 'Mrs J. Cunningham.'On the reverse is handwritten: 'Mrs J Cunningham came to Riverton in the early 60'. A photographers stamp for Carl Hagen in purple ink along with the blue circle stamp of the Wallace Early Settlers Museum Riverton. A catalogue negative number on the yellow sticker '00/4' and also written in pencil top left edge, along with 'P6.92.73' inked at the top righthand edge. Under the inked stamps faintly visible, written in pencil is 'nee Clode'.
It looks like the photo was previously part of an album collection due to the 4 adhesive corners on the back.