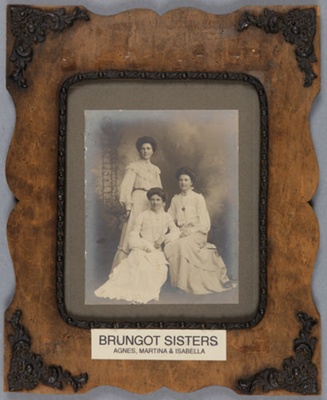 A framed photograph of three sisters of Norwegian / Scottish ancestry who grew up in the Pahia Roundhill area near Orepuki. Their father Knud Brungot emigrated from Norway and after arriving in New Zealand adopted the name Walter. The girl’s mother was born in Scotland as Jessie Mackie Bonthron.

Little sister Isabella was born in 1885. In 1909 she married William Cawthorn and they went on to have a family of five. Isabella passed in 1963.