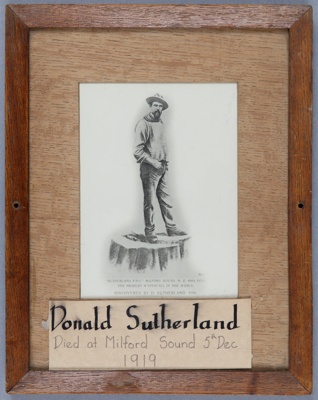 A framed reproduction of a photograph of Donald Sutherland standing atop a tree trunk. Donald was the first pākehā to discover the Sutherland Falls, the highest waterfall in New Zealand, in 1880. The falls were named after him at the suggestion of William Hart, a photographer travelling with him in 1883. Donald in turn named Mount Hart adjacent to the falls in honour of the photographer who so carefully carried his heavy glass plates and camera to capture the scene.

Donald died at Milford Sound on 5 December 1919. As Donald and his wife were the only people living in Milford Sound at that time, when Donald died Mrs Sutherland had to leave him on the floor of their home and move to another, empty house to await the arrival of the ship 'Hinemoa', the crew of which buried Donald. Mrs Sutherland stayed living in Milford until her death and is buried alongside her husband.

Front, handwritten label: 'Donald Sutherland Died at Milford Sound 5th Dec 1919'
Reverse, handwritten: 'DIED AT MILFORD SOUND. 5th Dec., DONALD SUTHERLAND 1919. HE AND HIS WIFE WERE THE ONLY FOLK AT MILFORD SOUND, SO WHEN DONALD DIED, HIS WIFE HAD TO LEAVE HIM ON THE FLOOR WHERE HE HAD FALLEN, COVER HIM & SHE MOVED TO ANOTHER HOUSE. MRS SUTHERLAND WAITED FOR 6 WEEKS, UNTIL THE GOVT. SHIP “HINEMOA” ARRIVED, SO THE CREW COULD BURY HER HUSBAND. MRS SUTHERLAND STAYED ON IN MILFORD UNTIL SHE DIED AND IS BURIED ALONGSIDE HER HUSBAND.'