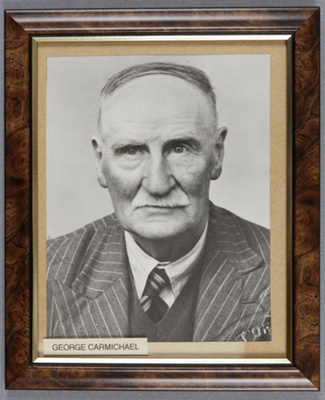 A framed black and white photograph of George Carmichael who looks to be in his mid to late 70s at the time the photo was taken.

The Carmichaels farmed at Gummies Bush. George bred Friesian cows, which were his pride and joy. He won 'Best of Breeds' awards at Southland and Otago A and P shows over a number of years.

George was also heavily involved in the local community as a Life Member of the Western and Southland A&P Associations, he helped establish the Pourakino Rabbit board, he served on the Gummies Bush and Thornbury school boards and on the Thornbury Saleyards Company. Land was also donated in Thornbury for use as a bowling green and sports ground.

George Carmichael was also instrumental in establishing the Wallace
Early Settlers Museum in Riverton which is now known as 'Te Hikoi' Museum. He was elected Chairman in 1941 and he set forth to construct the museum building which was opened on 26 January 1959 with 'The Squire' being the first person to sign the visitors' book. For 21 years he drove the funding and construction of the museum finally handing over the reins to Mr. Victor Stevens in 1962, the year George died.

They were living in Thornbury at the time of their deaths, Elizabeth in 1959 and George in 1962. They are buried together in Riverton Cemetery with their son James, who was killed in Italy during World War Two.