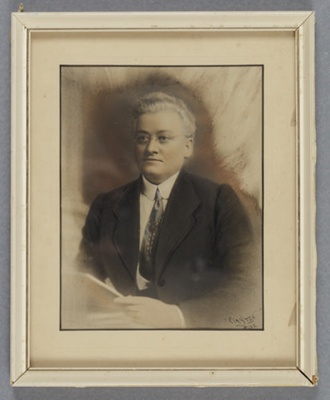 Helen Hunt was an incredibly busy woman who devoted herself to public service. The high esteem with which she was held is reflected in her obituary, which appeared in the Western Star, 1 December 1939:

It was with deep regret that her many friends heard of the death of Miss Hellen Lobb Hunt, which occurred on Sunday night at Riverton after an illness that has lasted for three months. As far as is known this has been her only illness.

Miss Hunt, who was 73 years old, was born in Milton street, Riverton, in October, 1866. She was the younger daughter of the late Mr and Mrs John Hunt, and with the exception of nine years in different parts of Australia, the whole of her life has been spent in Riverton.

Her father, John Hunt, was one of the first arrivals in the district, assisting Captain Howell in whaling and sailing with him on regular voyages between Sydney and the Jacob's River. Her mother, Mrs Margaret Hunt, was born in Scotland and arrived at Port Chalmers in 1860, and after a dreary voyage to the estuary at Invercargill, walked to Riverton, where she subsequently married.

Miss Hunt was closely identified with most of the movements associated not only with the development of Riverton but also of Southland. A very vigorous and markedly energetic woman all her life has been spent in constant activity. Originally crossing the Jacob's River in a punt to school, both Miss Hunt and her sister, Mrs Pearsev, remember the building and opening for traffic of all the bridges that are associated with Riverton.

She was the senior member of the Southland branch of the Rebekah Lodge, having been the Deputy District Grand Master, the highest provincial position. Miss Hunt was awarded the Past Grand Medal, and the Riverton Lodge having merged with the Lodge in Invercargill, when last in town Miss Hunt was presented with the Long Service Medal.

She was an assiduous collector for the Christmas Cheer Fund. Her early years were spent in various departments of the women's clothing trade in Riverton, Dunedin and Australia, and ultimately she started business in Riverton with Miss G. McKellar, with whom the partnership lasted for many years. After a short period in retirement, Miss Hunt again started in business as an outlet for her constant desire to be active. Holding a very definite view on the different movements with which she was associated, Miss Hunt always had the courage of her opinions, and she had no hesitancy in giving expression to them. Of a generous, kindly and artistic temperament, she had pointed several interesting studies of Riverton and the neighbourhood, and her passing is deeply regretted by a wide circle of friends.

She is survived by her sister Mrs W. Pearsey and family, her brother and parents having predeceased her within the last few years. The funeral took place on Tuesday at the Riverton Cemetery.