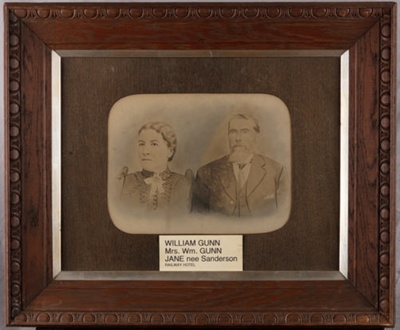 William Gunn married Jane Fraser Sanderson in Invercargill in 20 July 1865. They were both Scots and proprietors of the Railway Hotel in Riverton from the late 1880s to the early 1900s.

Ancestry.com records that they had eight children. Jane died in Riverton on 19 September, aged 68. Her obituary appeared in the Western Star on 21 September 1906 and is available online via Papers Past. William died on 18 February 1916 in Invercargill, aged 77. They are both buried in the Riverton cemetery.