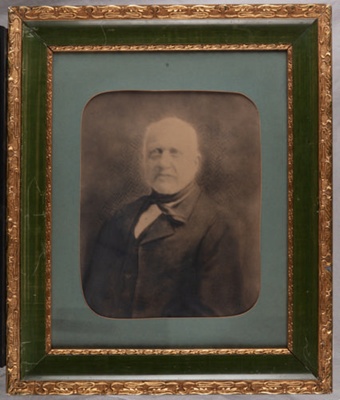 A framed black and white photograph of Richard Stevens.

Richard was born in Eastbourne, Sussex in 1802. He married Sarah Rason on 25 May 1828 and they had five children. They immigrated to New Zealand in 1852, on board the 'Royal Albert' and made their home in Riverton. Richard Stevens who came to be known as "Old Uncle Dicky" lived to the grand age of 87, outliving his wife by twelve years. Sarah died on 19 August 1877, and she was buried in Riverton cemetery on 23 August. Richard died on 8 July 1889 at Seacliff Lunatic Asylum. He is buried in the Riverton cemetery with his wife.

Richard's obituary appeared in the Western Star on 10 July 1889 and is available online via Papers Past.