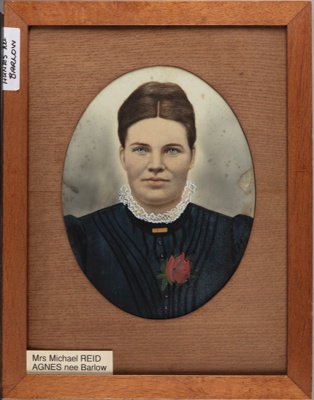 Agnes and her husband Michael Joseph Reid were both born in Aghadowey, Coleraine, Northern Ireland. Agnes in c.1846 and Michael in 1847. They married there on 20 October 1866 and immigrated to Dunedin, New Zealand between 1874 and 1875. They had 15 children, the first six were born in Ireland.

They lived in Dunedin for three years, before moving to Orepuki. They both died at Orepuki, Michael in 1927 and Agnes in 1929. Agnes appears quite young in this portrait, perhaps in her twenties so we have dated it to 1866 - 1876, though it is probable it was printed much later by copying an old photograph (the flower suggests it may even have been a wedding portrait).

Opalotype portraits were not available in Southland until the late 1880s and were not advertised widely until the 1890s. The opalotype, opal portrait, or ‘milk glass positive’, was a photographic process patented in 1857 by Glover and Bold of Liverpool. Rather than paper, an opalotype is printed on translucent white glass. The original process involved coating the glass with emulsion and printing directly onto it. A second process introduced by Englishman Joseph Swan in 1864, involved creating a carbon print of the photograph, which could then by transferred onto the glass. The large size of the opalotypes in Te Hikoi’s collection suggests the use of the latter process. The photos were often heavily reworked by a retouching artist, retaining their black and white appearance or with the addition of colour; the beauty of an opalotype is as much a testament to the artist as the photographer. Many opalotype portraits have incredibly life-like results to the face and hair, while the garments have been more simply painted. Some opalotypes are so heavily painted that they are not identifiable as photographs, while others retain a closer connection to the initial image. The process was never hugely popular, perhaps due to the considerable cost; preparing the carbon transfer was time consuming and used expensive materials, followed by the artist’s work, making opalotypes a luxury item. This coupled with the delicate nature of the glass makes these works rare.