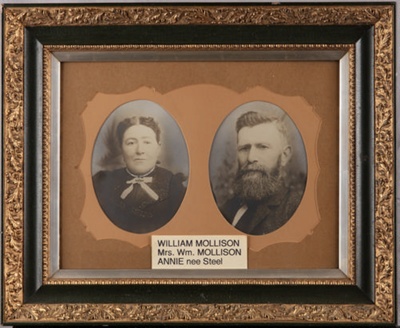 William was born in Forfarshire in 1830 and Annie on 29 April 1853 at Gorbals, both in Scotland. Several notes fixed to the back of the frame give us more information about this couple. William went to Australia in 1857. He worked on a station in Victoria for four years before sailing to New Zealand around 1863. He followed the gold workings for a time and then moved south and settled at Limestone Plains, near Isla Bank, also known previously as Calcium, where he farmed.

In 1876 he married Annie Steel, whose parents had arrived in New Zealand in 1849. Ancestry.com records that they had two children.

William died on 9 January 1915, aged 85. Annie died on 8 May 1938 aged 85. These pictures and frame have been prepared by the Philips Bros, which dates the printing and framing to 1904-1910. However, William's apparent age in the photograph does not line up, so it is likely the photographs are from older photographs. Despite their 24 year age gap they appear similar ages in this duo, which further confirms that this is a compilation.