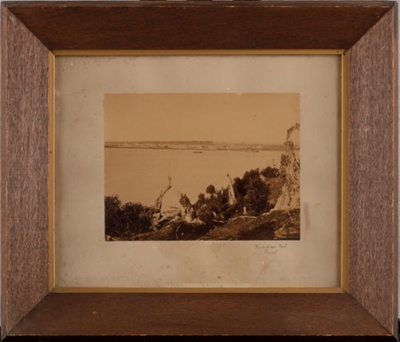 A framed black and white photograph of the Aparima estuary and early Riverton township from South Riverton. A note on the back dates this image to pre-1873, which is in keeping with the absence of the first bridge linking North and South Riverton, which was built c.1874-1875.

Photographs by the Nicholas Brothers date from around 1865-1878. Richard John and James Martyn were two of four brothers who emigrated to New Zealand from England. Richard was the primary driver of the Nicholas Brothers partnership and we know he traded under that name even when his brother James had returned to England for 7 years. They had premises in Riverton in 1874, for about a year. Before that they seem to have been Otago based, but they travelled for work - we know they visited Riverton in 1872 to set up a temporary studio. There was a third Nicholas brother who was also a photographer - Collin, who lived in Milton.