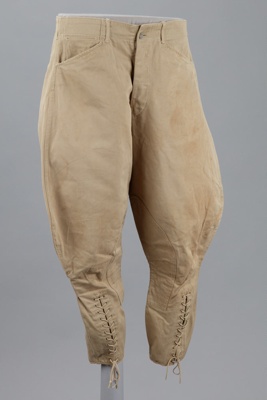 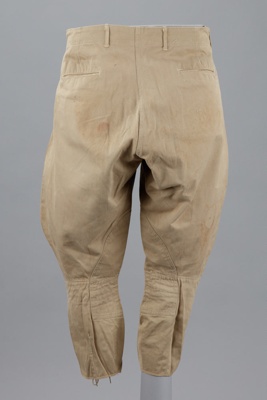 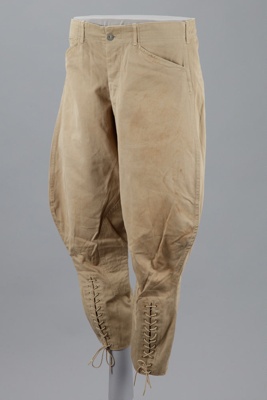 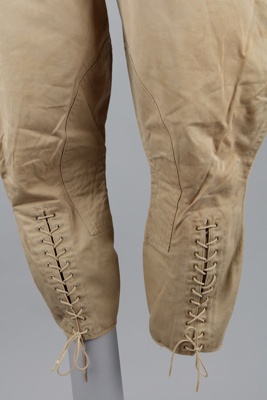 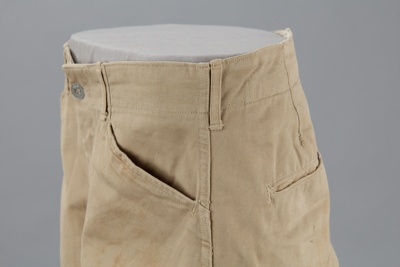 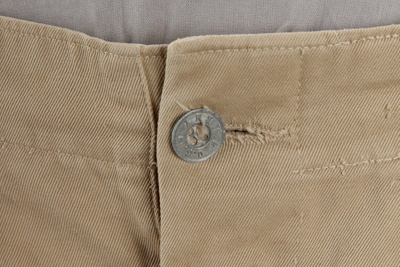 These breeches were kindly donated by Mackintosh siblings Lesley, June, Robyn and William (Bill) as part of a trunk load of vintage, family clothing. We cannot be sure how they came to the family but it is most likely that the donors' grandfather Charles Edward (Charlie) Mackintosh brought them back from Europe after serving with the New Zealand Army in World War One.

The donors trace their paternal line to their great-great grandparents, James and Anne Mackintosh who emigrated from Melbourne to Southland in 1866 and farmed properties in Western Southland called Strathmore, then Mayfield and Gladfield near Drummond. James was also an active politician at both a local and national level, his farming and political careers are summarised on Wikipedia.

This pioneering couple had 11 children. The donors’ link to the second son William who married Caroline Bennett in 1880, they had ten children and farmed at Gladfield, the homestead for which was known as Greenlea. Their fourth child, Charles Edward (Charlie) was born in 1884, served in World War One and later farmed at Monamore in the Avondale District. The donor’s father Donald McLure Mackintosh also farmed at Monamore and purchased an adjoining farm called Waikana, which Bill now owns.

C. Kenyon Company were based at 754 Pacific Street in Brooklyn, New York.

Printed on waistband: 'Waist 32 , Inseam 26'
The waist button is stamped 'U.S.A Army'
The 5 fly buttons have U.S.A stamped on them.