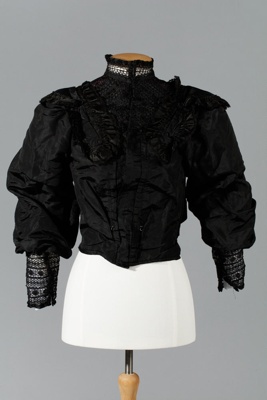 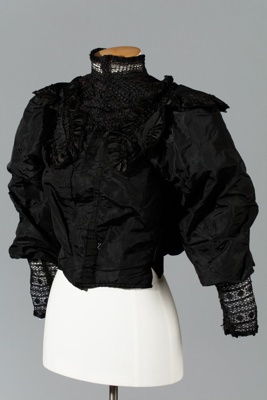 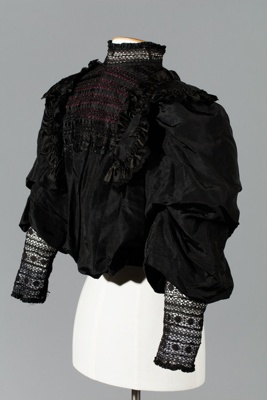 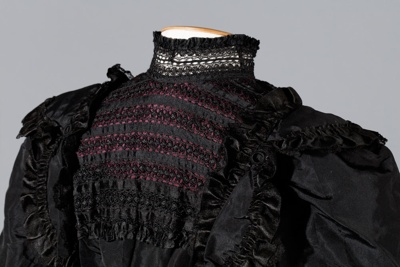 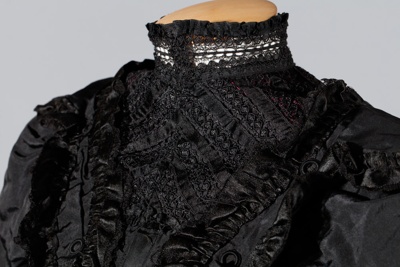 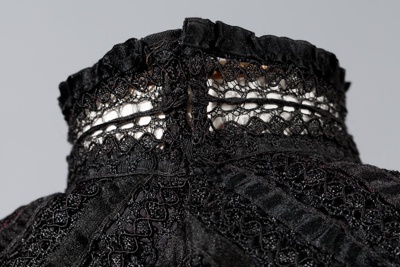 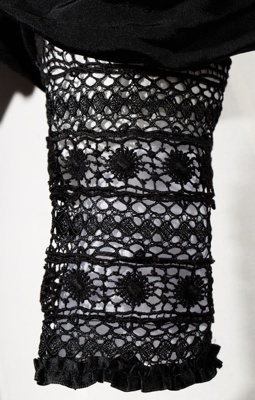 This silk bodice was worn by Jane Wilson Arthur of Pukemaori. Te Hikoi's collection records note that it was made by a Mrs England who was an Invercargill based dressmaker.

Black silk bodice with high neck lace collar and lace yoke. Puff sleeves with long lace cuffs bringing sleeves to three quarter length. The bodice has aubergine silk detailing. It is lined with black cotton, with a full length opening fastened by six buttons. The outer is fastened by eight metal hooks and eyes. The side and neck seams are boned.

Jane Wilson Arthur (neé McQuillan) married William Arthur (Bill) at Orepuki in 1900. The Arthur and McQuillan families were both farming at Te Tua. When Papatotara was being opened up for settlement under the lmproved Farm Settlement Scheme, Bill and family took up bush land there and eventually became dairy farmers. They had three children; the two sons died tragically at young ages, and their daughter did not marry. According to newspaper reports, Jane was very involved in the community and had a lovely singing voice so would have had occasion to wear the beautiful black bodice. Jane died in 1969 aged 91, and William died in 1968, aged 94. They are buried at Tuatapere with a son and daughter, the other son is buried at Orepuki with his McQuillan grandparents.

Ann England nee Ashley, married John Ashley in England and came to Invercargill c.1879. They opened a draper shop at 2 Deveron Street and she advertised as a milliner and dressmaker and later from Jed Street. They were in business for many years and raised a family of eight all born in Invercargill. Ann died in 1938 age 80 and John in 1940 age 86. They are buried in the Eastern Cemetery Invercargill.