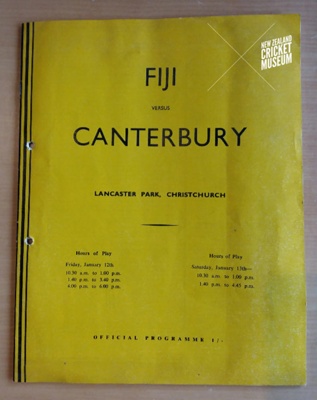 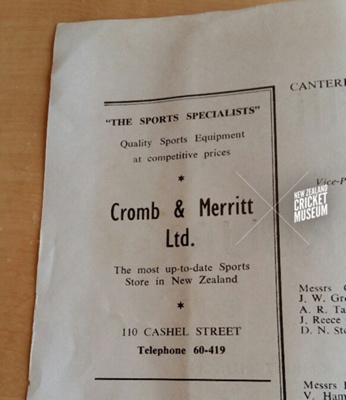 "...it is very probable that the Fijians, whose names do not appear in the test records, have given New Zealanders more pleasure than any other touring teams."

These words are written in the introduction to this programme for the 1962 match between the touring Fijian side and Canterbury. Played over two days at Lancaster Park, the 975 runs scored gives an indication as to why New Zealanders were so fond of the tourists.

The match was not deemed to be first-class, but it included some highlights all the same:
Walter Hadlee was tempted out of retirement to play his first game for Canterbury in a decade;
Hadlee played alongside his son Barry in the match;
Ilikena Lasarusa Talebulamainavaleniveivakabulaimainakulalakebalau (named as I. Bula in the scorecard and match reports) scored a century to follow the ones he scored against Canterbury on the 1948 and 1954 tours.

Inside the front cover there is another piece of New Zealand cricketing history: an ad for (Ian) Cromb and (Bill) Merritt's sporting goods store.

Paper, bound with two staples in the spine.