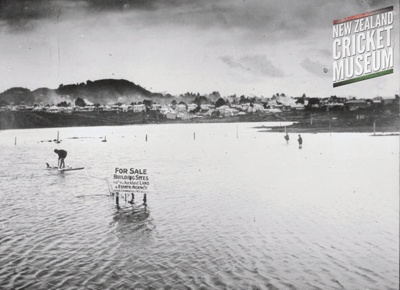 1907 was a rough year for the Eden District Cricket Club's (EDCC) ground at Kingsland, Auckland. Heavy flooding in early January saw water cover the ground but, in the true traditions of cricket, cricket practice resumed there just two weeks later - although the surface was stated to be "pretty soft". Just a few days after these practices resumed, heavy rain again flooded the ground.

Since the Kingsland Cricket Club first took up the swampy location for a cricket ground in 1899, drainage was an ongoing concern. Although the EDCC made moves to improve that after the 1907 floods, upkeep of the ground was becoming too much for them by 1909 and they made moves to sell the ground, now known as Eden Park.

After Auckland faced Australia in the ground's first First Class match in 1914, Eden Park would become the home of Auckland Cricket. An honour it still holds, 100 years on.

Awesome photo. This is just a block from the Vernon Systems head office. It looks very different now.