Photograph of Shelagh Wood in the crowd at 1949's first Test between England and... 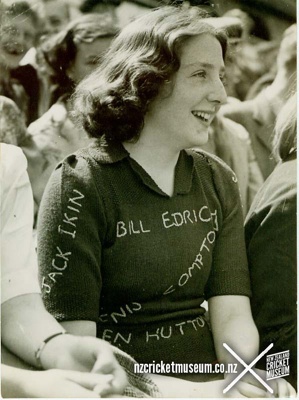 Shelagh is in the crowd on the second day of the first Test between England and New Zealand at Headingley, Leeds, 13 June 1949.

Two of the players featured on Shelagh's jersey made centuries in the first English innings, Hutton & Compton, while Jack Cowie and Tom Burtt claimed 5-wicket bags for the visitors.

Eventually New Zealand were set 299 to win in two and a half hours and, as Wisden put it, 'at one time it seemed as though they intended going for the runs'. They would eventually finish on 195 for 2 as the game ended in a draw.

The efforts of the New Zealanders in this Test, however, set the scene for the historic tour.