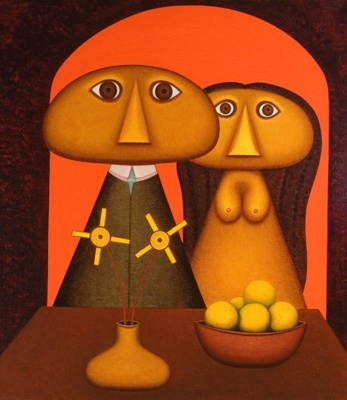 Man and woman figures with still life and flowers

'I am painting a little world of my own in a little world of my own. In the paintings I am building a façade for my own world, against the establishment façade, the façade of hypocritical suburbia.' Illingworth came to New Zealand from England in 1951, expecting perhaps to find a society free from the rigidity and class structure that he had left behind. Instead of a South Seas paradise he encountered what he regarded as a highly restrictive and spiritless society. His claustrophobic images are of a suburban dream which has lost its meaning, its inhabitants rendered incapable of independent thought or action. While surrounded by rather comical and superficial accoutrements of domesticity, our 'man and woman' are rendered as mouthless, wide-eyed replicants with the repeated oval shapes adding to the sense of conformity to an artificial norm. Illingworth's paintings are wry but savage commentaries on the insular society he found in New Zealand and have this in common with such books as Austin Mitchell's The Half-Gallon, Quarter-Acre Pavlova Paradise and Gordon McLauchlan's The Passionless People. Illingworth found some solace when he lived at Matauri Bay in Northland, where he was accepted by local Maori whose values and approach to life he greatly admired. (from The Guide, 2001)