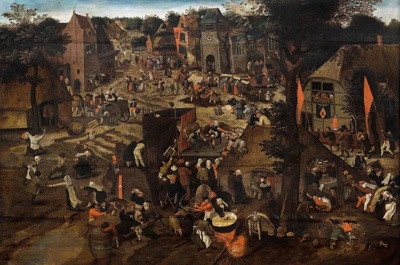 Both Pieter Bruegel the Elder and his son Pieter the Younger painted mass scenes of revelry. A Village Fair nominally illustrates a religious festival, a welcome respite from the monotonous toil of peasant existence. Effigies of Saints Anthony and Hubert are carried in a procession through the village, but for the most part the spectators' attention has been diverted elsewhere - they gaze instead at an absurd play, 'Trick Water Farce', by a group of travelling actors. Acts of individual devotion are still evident - a man kneels at confessional, two men toll the church bell, and another politely doffs his hat as he gives directions to two travelling monks. For the most part, however, the villagers are content to dance and sing in a carousing mêlée. Pieter Bruegel the Elder was influenced by the work of Hieronymus Bosch (c1450-1516), and saw his audience as the common people, rather than his bourgeois patrons. Interestingly, the latter were eager to buy scenes reflecting a simple life, remembered but impossible to recreate in the more complex social structures found in the cities and towns. This theme of a rural arcadia continued to attract artists and collectors for centuries to come. Pieter Brueghel the Younger based many of his own works on his father's compositions, but A Village Fair is original. It proved extremely popular, and he produced several versions, all painted between c1616 and 1635. (from The Guide, 2001)