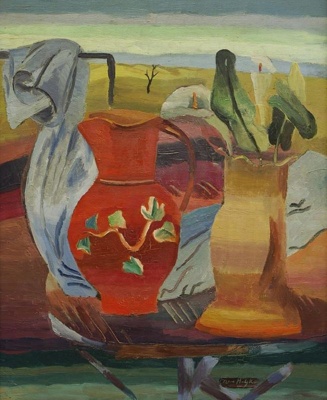 The fusion of still life with landscape was a distinctive theme in Frances Hodgkins' mature work, deriving from artists such as Picasso and Matisse, and first treated by Hodgkins in the late 1920s. In 1929 an invitation to exhibit with the progressive Seven and Five Society marked recognition by the British avant-garde and Berries and Laurel was first exhibited at the Society in January 1931. France Hodgkins often used a warm, sensuous, Mediterranean palette of reds, oranges and blues, but the predominance of green and brown in this work suggests an English scene, which the artist admitted to finding 'unsympathetic & difficult'. Simplified vessels and decorative motifs in the foreground take precedence over the landscape, yet her treatment of space is continuous. The same white vase and berries recur in two other paintings of late 1930, produced while Hodgkins was staying in a friend's cottage at Bradford-on-Tone. Hodgkins' achievements are a testimony to her remarkable tenacity and dedication to her chosen profession, despite the prejudices she faced as a woman artist in colonial New Zealand, and later financial difficulties in war-torn Europe. She moved from strength to strength throughout her career, beginning as an amateur watercolourist in Dunedin in the late 1800s, then becoming a successful expatriate painter before her eventual acknowledgement as a forerunner of British modernism. (from The Guide, 2001)