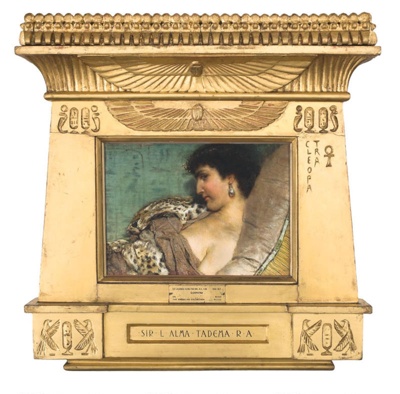 '. . . it seems to me that anyone who studies history always returns to the cradle of civilisation'. Sir Laurence Alma-Tadema was one of the richest and most successful of the Victorian and Edwardian painters. Born in Holland, he settled in England at the age of 34 and devoted his life to painting imaginative reconstructions of ancient Rome and Pompeii. An enthusiastic public enjoyed seeing his languorous, elegant women in exotic settings and he developed a distinctive brand of sentimental classicism. A frequent model was his second wife, who appears here as Cleopatra, the ultimate femme fatale, draped in a leopard skin and reclining against a gold silk pillow, a mysterious and compelling temptress. Five years later he adapted this subject to a larger painting, Antony and Cleopatra, in which the Egyptian queen appears on her royal barge in almost identical garb and pose. A fastidious realist, Alma-Tadema built up his pictures with great precision and was famed for his ability to paint the textures of marble, fur, lustrous skin and sumptuous fabrics. Careful underpainting contributed to the effect, a practice followed by Charles Goldie, whose skill was similarly applauded here in Auckland. Alma-Tadema's ornate frames were designed to confirm the fantasy that his paintings came from another world and another time. Although his Egyptian visions now seem a little absurd, Alma-Tadema's popularity with the public has never waned. (from The Guide, 2001)